Hundreds of dolphins made a surprise appearance for one lucky couple this weekend.

The giant pod was spotted near to the Pembrokeshire coastline in Wales.

According to wildlife experts, this many dolphins have never been seen so close to shore.

Lucky couple Lloyd Nelmes and Emma Westoby were stunned at the rare sight.

Lloyd, 27, said: ‘It was awesome – they were just everywhere we looked.

‘Generally January isn’t a great time of year for them. It’s not unheard of but it’s not common.

‘You would expect to see them more in the summer with big shoals of mackerel.’

The pair had been saling near Strumble Head, near Fishguard, when the small army of dolphins first appeared.

He said: ‘In over 20 years of recording cetacean species from Strumble, this is almost beyond belief.

‘Never before have so many dolphins been seen so close to the shore.’

The huge Pembrokeshire pod could be due to warming oceans or a ‘catastrophic crash in fish populations elsewhere’, he said.

Lloyd, who works for the Sea Trust, added: ‘Sometimes you get a creche group of dolphins where you get mothers and calves who wouldn’t be that keen to come up to the boat, they’ll be trying to avoid boats to stay safe.

‘Whereas if you have a feeding group of dolphins that have just been well fed they will do exactly what they did with us and come and play with you.

‘You will get a better, longer and closer experience if you give them respect and let them come to you.’ 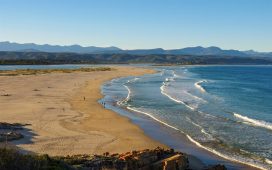 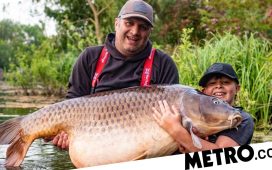