She’s bounced back after her conman ex-boyfriend Medi Abalimba was sent back to prison.

And Love Island star Georgia Steel put on a sizzling display as she went braless beneath a lacy black bodysuit and wet look trousers while attending the launch of Belvedere + Ice at Mayfair Bar in London on Monday night.

The reality star, 21, left little to the imagination in the risqué ensemble, after her ex was sent back to prison last month for ‘breaching the terms of his licence.’ 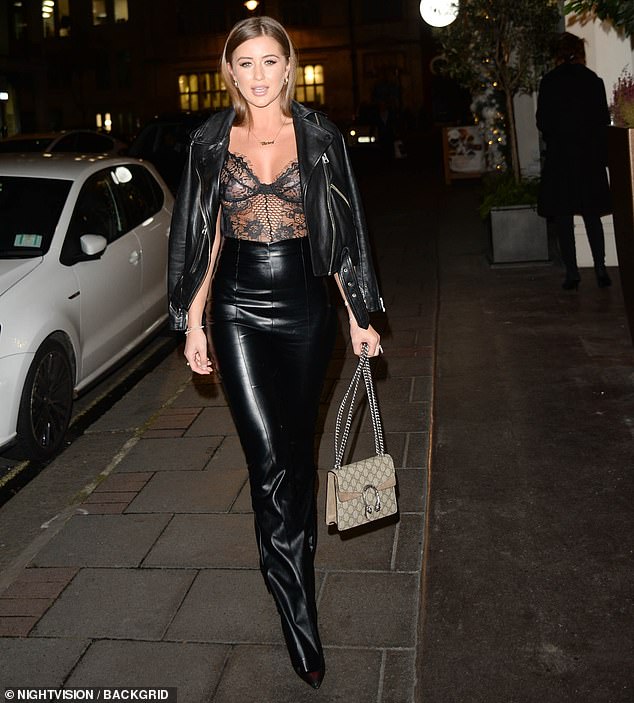 Georgia Steel, 21, put on a sizzling display as she attended the launch of Belvedere + Ice at Mayfair Bar in London on Monday night

Georgia went braless beneath her revealing attire, with nipple patties concealing her modesty.

The Love Islander boosted her height with pointed black stilettos and draped a biker jacket over her shoulders.

She added some extra glamour to her look with the help of fluttering false eyelashes and her glossy brunette tresses styled sleek.

Georgia displayed her taste for the finer things in life by carrying her belongings in a Gucci logo handbag. 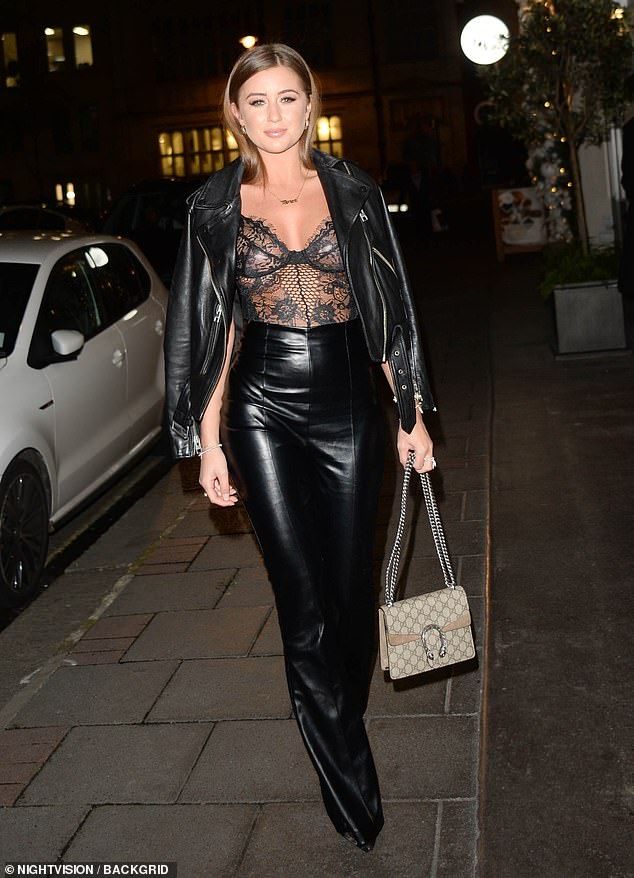 Biker babe: The Love Islander boosted her height with pointed black stilettos and draped a biker jacket over her shoulders 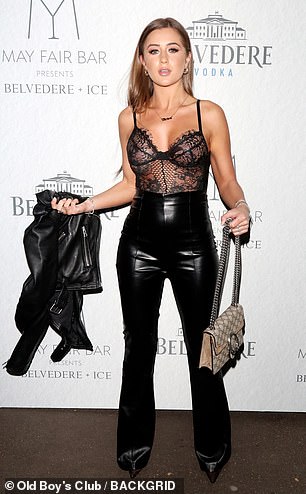 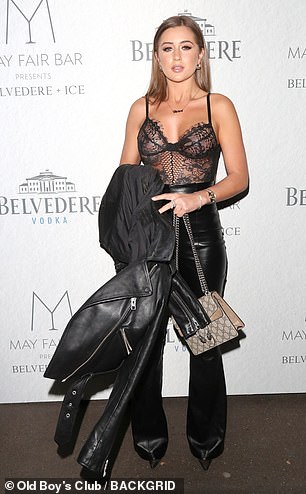 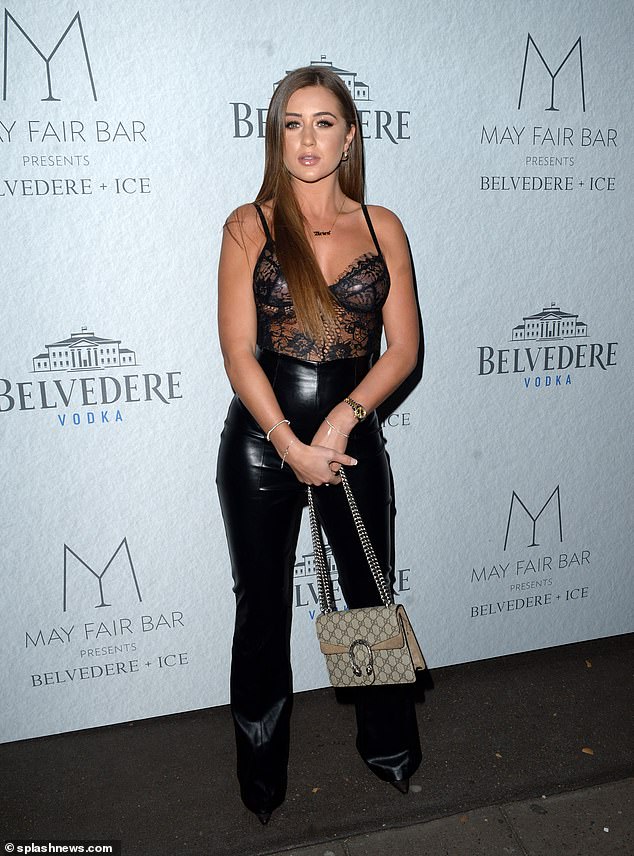 Beauty: She added some extra glamour to her look with the help of fluttering false eyelashes and her glossy brunette tresses styled sleek

Georgia’s outing comes after the Sun reported that Abalimba has been sent back to prison for ‘breaching the terms of his licence’.

A Probation Service spokesman told the publication: ‘Medi Abalimba has been returned to custody. Offenders on licence are subject to strict conditions and can be returned to prison if they fail to comply.’

Abalimba, 30, was arrested at Kadie’s Club in Mayfair, by Met Police on September 13 and was allegedly taken from the nightclub in handcuffs during a ‘VIP party night’ before he was later released on bail, The Sun reported. 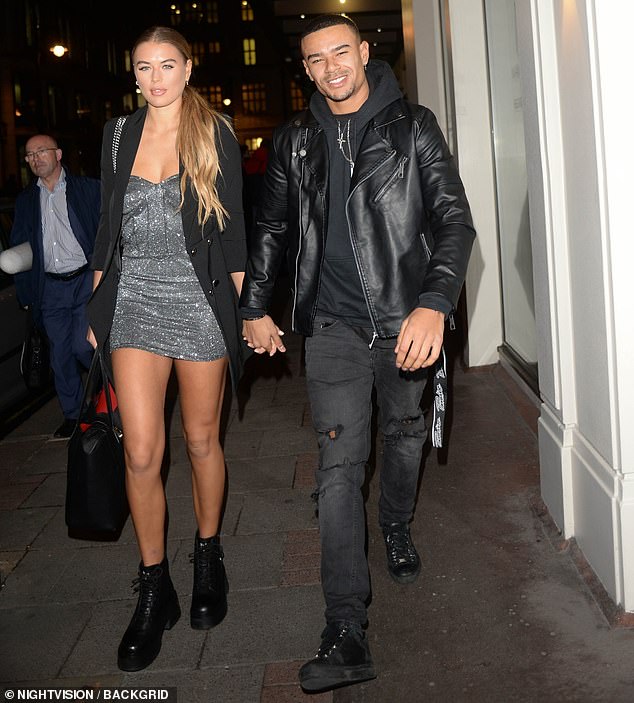 Cute couple: Wes Nelson and Arabella Chi walked hand in hand as they arrived at the bash 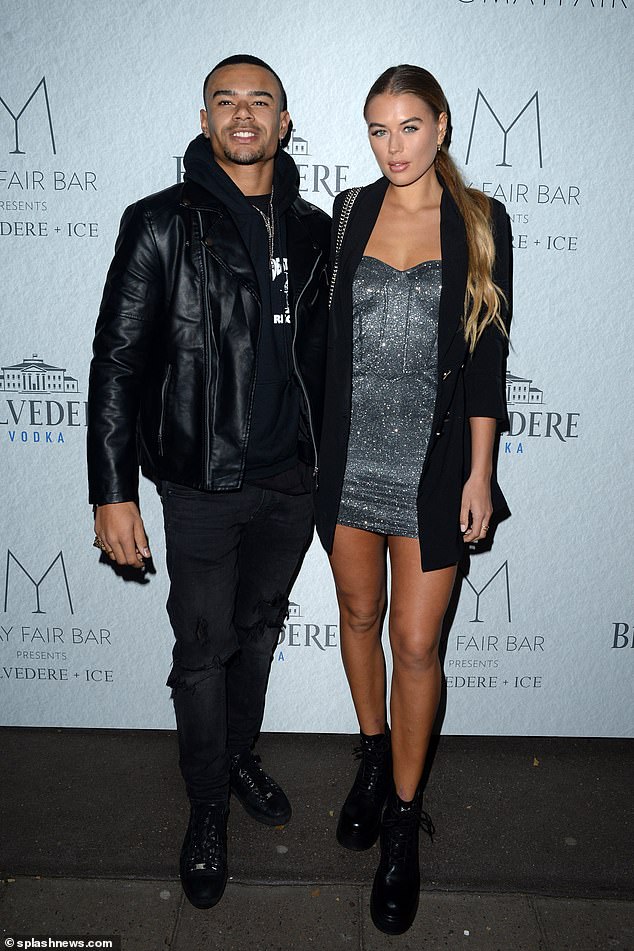 Coordinated: The loved-up pair were perfectly coordinated in their edgy ensembles

At the time a Met Police spokesman said: ‘At approximately 23:55hrs on Friday, 13 September a man, aged in his 30s, was arrested on suspicion of fraud offences at a venue in Swallow Street, W1.

‘He was taken to a south London police station and has since been bailed pending further enquiries.’

In April, Georgia claimed her convicted conman ex Medi has stolen tens of thousands of pounds from her bank account.

Making an entrance: Gabby Allen wowed in an off-the-shoulder plunging white top as she hit the launch of the Belvedere + Ice experience 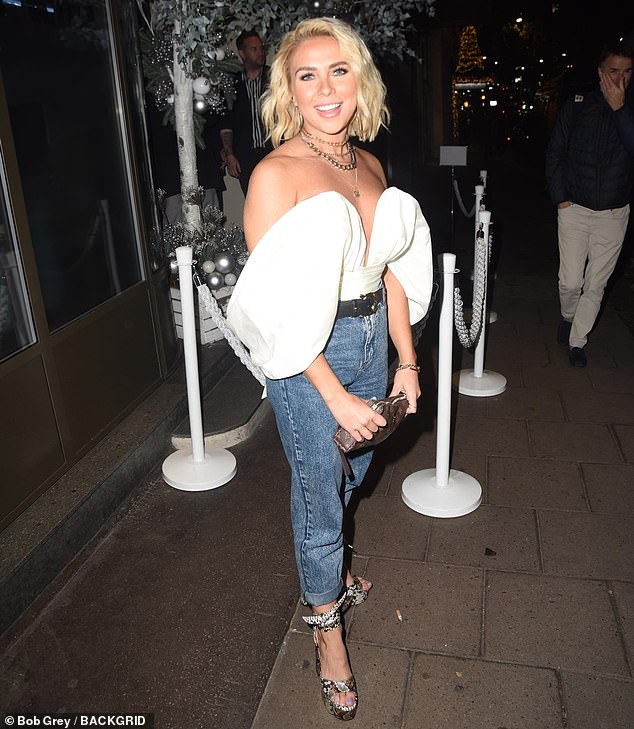 Happy: Gabby looked in great spirits as she enjoyed a night out with her Love Island pals on Monday night, just as her ex-boyfriend Myles Stephenson was confirmed for I’m A Celebrity 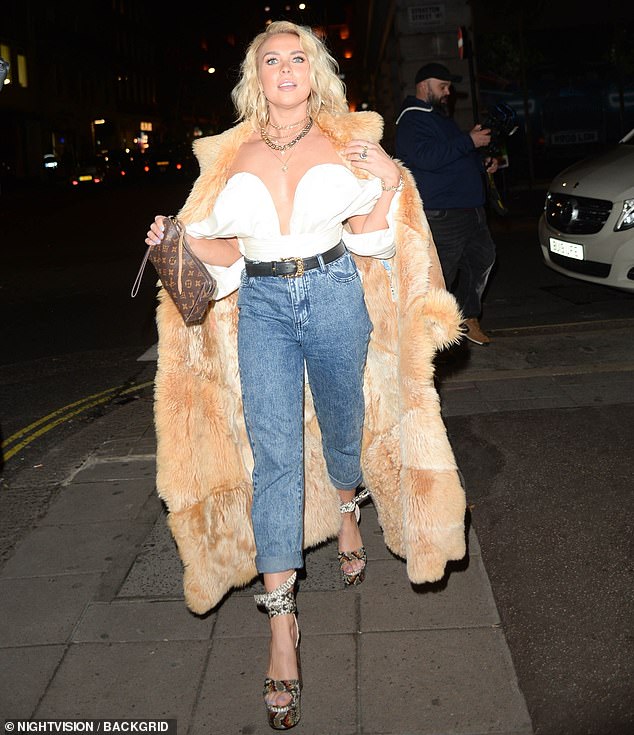 In an emotional interview with The Sun, Georgia said she has been ‘fearing for her life’ since splitting from the former footballer.

She said: ‘I went on my online banking and I noticed a drastic amount had just gone. I was in my flat and I’ve never been in a situation like that in my life. I was physically sick. I sat on my sofa and thought I was going to faint.’

‘I’m devastated and I’m fearing for my life. I don’t want anyone to go through what I have. I feel like this is going to affect me for life. Looking back I feel stupid, but at the time it’s like being hypnotised.’

Amanda Holden, Ashley Roberts and Jamie Theakston dance together in a behind the scenes routine