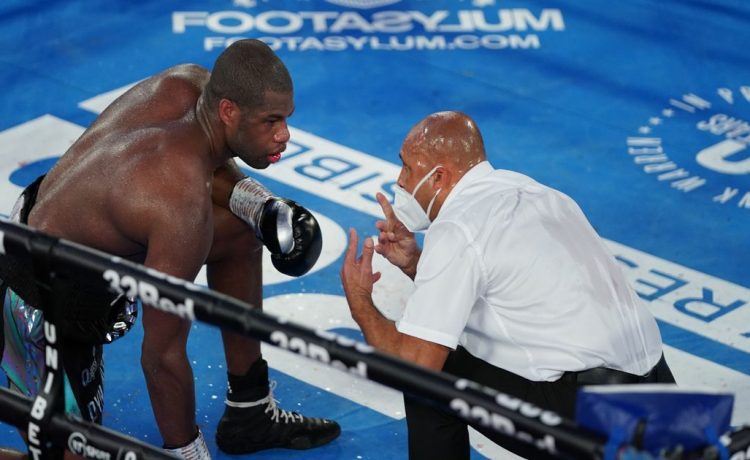 Daniel Dubois’ decision to take a knee against Joe Joyce might have saved his career, believes George Groves.

Dubois was ahead on the judges’ scorecards entering the 10th round of his clash with Joyce last weekend.

But his left eye had swollen shut and he took a knee after another jab landed square on its target.

Unable or unwilling to beat the referee’s count, Dubois suffered his first career injury and was taken to hospital.

He now faces a rebuilding job both physically and mentally – but Groves believes he has at least given himself the chance to fight on.

“If Dubois has a serious injury to his eye that could be a career-ending injury if he’d fought on for a couple more rounds then what a brilliant and courageous decision he’s made at that point as an unbeaten pro in a huge, huge fight, to say this is just not right,” he told Mirror Fighting.

“I watched Kell Brook get an orbital eye injury and he might be aware of that.

“If it comes out that he’s got an eye injury then he deserves praise for having the courage to pull himself out at that stage to fight another day.”

Dubois has been widely criticised by the boxing fraternity for quitting.

But Groves added: “I was really disappointed that he was thrown under the bus. We don’t know what sort of eye injury he has or what sort of pain he was in.

“You can trust someone like Daniel Dubois not to articulate himself at the right time and that’s not his fault, it’s something we know.”