GEORGE Floyd’s family members called ex-cop killer Derek Chauvin’s 22 ½  year prison sentence a “slap on the wrist” and Rev. Al Sharpton slammed it, claiming “justice would have been the maximum.”

“Twenty-two years is not enough,” Floyd’s nephew Brandon Williams said, ripping the 45-year-old’s prison punishment downplaying the punishment as as far too light.

The deeply hurt young man suggested that letting Chauvin off without the full extent of hard time proves “you can kill a man in cold blood and get a slap on the wrist.”

“I won’t celebrate this,” Williams concluded, “but I will celebrate a guilty conviction on a police officer who killed a black man.”

“This right here, this 22-year sentence they gave this man, is a slap on the wrist. We’re serving a life sentence not having him in our lives. And that hurts me to death,” he said.

“This verdict and this sentencing is the longest sentence we’ve seen but it is not justice because George Floyd is in a grave tonight even though Chauvin will be in jail. So let us not feel we are here to celebrate because justice would have been George Floyd never having been killed,” Sharpton said, according to KTVU.

The clergyman stood alongside several Floyd family members the extensive legal team outside of the Hennepin County Courthouse in Minneapolis on Friday afternoon before scores of Floyd and Black Lives Matter supporters that assembled there to witness the sentencing handed down by Judge Peter Cahill.

Civil Rights attorney Benjamin Crump praised sentencing as progress in the courts, but urged policy changes and called on lawmakers to act.

“We can breathe just a little easier today and we thank you for that,” he said.

“We have now gotten some accountability on the criminal level.”

Given the fact that Chauvin is awaiting trial on federal civil rights charges in Floyd’s death, Crump suggested he could be found guilty and be handed an even more substantial amount of time tacked onto the state’s sentencing term.

Chauvin’s was found guilty on April 20 by a jury for murdering of George Floyd where he was videotaped pressing the handcuffed man’s throat for up to 9 1/2 minutes on May 25, 2020, even after the 46-year-old black man protested, “I can’t breathe” before he went limp.

The convicted ex-cop’s 22 ½ month punishment was one of the longest given a former police officer for using unlawful deadly force in the United States, Minnesota Attorney General Keith Ellison confirmed in statements afterward.

Chauvin could have been hit with the maximum penalty of 40 years on the second-degree unintentional murder charge.

Prosecutors had been vying for 30 years. Chauvin’s defense attempted to spare the killer ex-cop of a low prison term and even tried to seek his release on probation.

“My family and I have been given a life sentence. We will never be able to get George back,” Philonise said in his victim impact statement, before pleading the judge to give Chauvin the maximum sentence.

Terrence turned to Chauvin directly, asking him: “I want to know from the man himself, why? What were you thinking? When you had your knee on my brother’s neck?”

Chauvin’s mother Carolyn Pawlenty attempted to convince the judge to go easy on her son.

“I have always believed in your innocence and I have never wavered from that,” she said in open court.

In his sentencing memo, Judge Cahill wrote that Chauvin killed Floyd in a “manner that was particularly cruel and an abuse of his authority.”

We want PROOF John McAfee is dead, says sister of his ‘murder victim’

“It was particularly cruel to kill George Floyd slowly by inhibiting his ability to breathe when Mr. Floyd had already made it clear he was having trouble breathing,” he wrote.

With good behavior Chauvin could return to society in about 15 years after serving two-thirds of his sentence.

Following his conviction, Chauvin has been incarcerated at Minnesota’s maximum security prison in Oak Park Heights, according to Reuters.

It’s unclear now where he will spend his prison term. 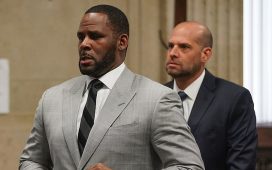