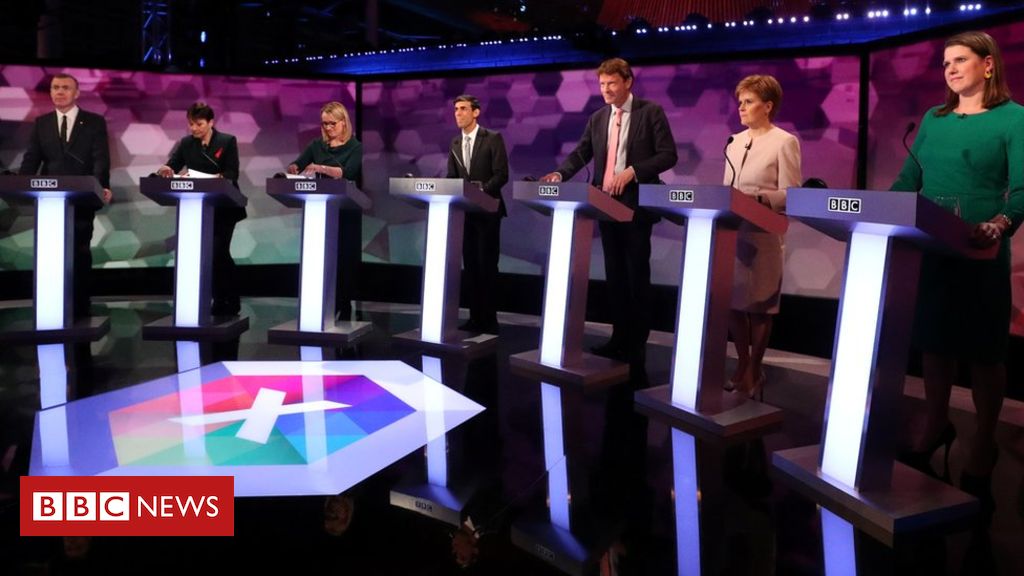 BBC Reality Check has been looking at some of the claims made during the course of the 90-minute programme.

Conservative Rishi Sunak claimed: “We’ve outlined a plan for £34bn [for the NHS], that will go on putting 50,000 more nurses on our wards, 50m more GP appointments and new and upgraded hospitals.”

About 30,000 of these will be from training, apprenticeships and recruitment from abroad. However, the rest will be from keeping nurses who might otherwise have left the profession. A survey by the Nursing and Midwifery Council suggested that about 50% of those leaving were due to “disillusionment” or “pressure”.

How many nurses does the NHS need?

The pledge of 50m more GP appointments is based on a promise to have 6,000 more GPs by 2024-25. About half of that increase will come from training, but the other half is due to come from retention and international recruitment.

When it comes to investment in the NHS, the £34bn is the amount of money that will be added to the annual NHS budget by 2023-24, but the cash sum isn’t necessarily the most helpful figure to use.

Because the costs of medicines and equipment and paying staff are rising, the government’s own figures show this will actually be worth less by 2023-24 – about £20.5bn once adjusted for inflation. That’s what we call the “real-terms” amount because it’s a reflection of how much you can buy with the money by the time it is used.

The Conservatives pledge would mean funding going up by 3.4% a year through to 2023-24.

This would be higher than the years from 2010 – under the Conservatives in coalition government with the Liberal Democrats – when overall health spending increases were between 1 and 2%.

But it would be significantly lower than the Labour governments of Tony Blair and Gordon Brown when it averaged 6% a year, and lower than the plans put forward by Labour now.

Reality Check: The last few years have seen increases in the rarest, most serious types of violent crime but overall, violent crime is steady or falling.

In England and Wales, the Office for National Statistics says that total levels of violent crime have remained steady in recent years – about 1.3 million incidents against adults in the most recent data – after a long downward trend.

But the data includes “minor assaults such as pushing and shoving” and death and injuries caused by dangerous driving.

Rarer but more serious crimes have increased since 2014.

Homicides are down 5% from the previous year, at 681, after four years in a row of increases.

Offences involving knives or other sharp objects are up by 7% compared with the year before, to 44,076 – the highest number of incidents since March 2011.

Scotland has seen similar trends – a long term decline, but increases in the rarer, more serious types of violent crime like attempted murder and serious assault.

Catch up on the debate

Reality Check: Asked about nuclear weapons, SNP leader Nicola Sturgeon said the UK’s Trident nuclear deterrent is both a moral issue and a financial one – “I don’t think we should be wasting £200bn on it”.

The nuclear submarine programme is based in Scotland.

But the estimate of £200bn is not money that is spent – or saved – all at once. Instead, it’s a figure that estimates total costs over the lifetime of the programme – about 30 years.

Because those estimates include spending that is decades from now, they make assumptions about the future economy – so it’s impossible to be precise about the number.

The SNP’s number comes from the Campaign for Nuclear Disarmament, which based it on the best available figures. The largest element by far is the annual in-service cost for decades, estimated at more than £140bn.

The Ministry of Defence says the cost of building new submarines would be £31bn alone.

Reality Check: Offshore wind is currently more expensive than onshore wind, gas, or solar, but costs have been tumbling rapidly in price.

An auction in September saw developers agree to sell power from their projects for less than £40 per megawatt hour – a record low price for offshore wind.

Analysis by Carbon Brief suggests that when these new windfarms start running in 2023, they could be slightly cheaper than existing gas-fired power plants.

However, the cost of that power in the future will depend on wholesale gas prices, which are difficult to predict.

The Lib Dems managed the Department for Energy and Climate Change from 2010 to 2015 – so they can claim some credit for supporting the rapid development of the offshore wind industry during those years.

However, the price for offshore wind fell by 30% in the past two years, long after the Lib Dems left government.

Plaid Cymru’s Adam Price claimed: Wales has “the lowest wages across these islands”.

According to data from the Office for National Statistics, pay in Wales averages £446 a week.

However, average weekly pay in Northern Ireland is below Wales, coming in at £432 (ie £14 a week lower than Wales).

The Green Party’s Caroline Lucas claimed that the EU’s freedom of movement is a popular policy when it’s explained to voters.

Reality Check: Caroline Lucas took issue with the assertion that most opinion polls show support for controls on immigration.

Ms Lucas said: “When people are shown that freedom of movement is a reciprocal right, then actually it’s something that is popular in this country.”

This is a scenario where differently phrased questions on the same topic produce different answers.

Asked how strongly they agree with keeping freedom of movement – “so that people from any EU country can live and work in the UK, and people in the UK can live and work in any EU country”, more than half the respondents to a ComRes survey carried out earlier this month supported the idea – 31% strongly, 25% “somewhat”. (“Neither agree nor disagree” and “don’t know” were 11% and 10%)

And a 2017 poll by YouGov for anti-Brexit campaign group Best for Britain asked about a plan that is effectively freedom of movement, without calling it that: “The right to travel, work, study or retire in Britain, in exchange for EU countries giving British citizens the same rights.”

So Ms Lucas is correct – but only if, as she said, the question is asked in a specific way.

Reality Check: The government’s 2018 long-term economic analysis suggested the UK would be economically poorer under any form of Brexit, compared with staying in the EU.

It said that if the UK had a Free Trade Agreement (FTA) with the EU after Brexit, the country’s Gross Domestic Product (everything produced in an economy in one year) would be 6.7% lower after 15 years than it would have been compared with remaining in the EU.

And if the UK left the EU with no deal, the economy would be 9.3% smaller after 15 years than it would be if Brexit didn’t happen at all.

The vast majority of economists agree with the assessment that Brexit would make the UK poorer compared with staying in the EU.

No official analysis of the government’s current Brexit deal has been published, although the National Institute of Economic and Social Research recently published an analysis that claimed it would leave the economy smaller than remaining in the EU would.

What claims do you want BBC Reality Check to investigate? Get in touch