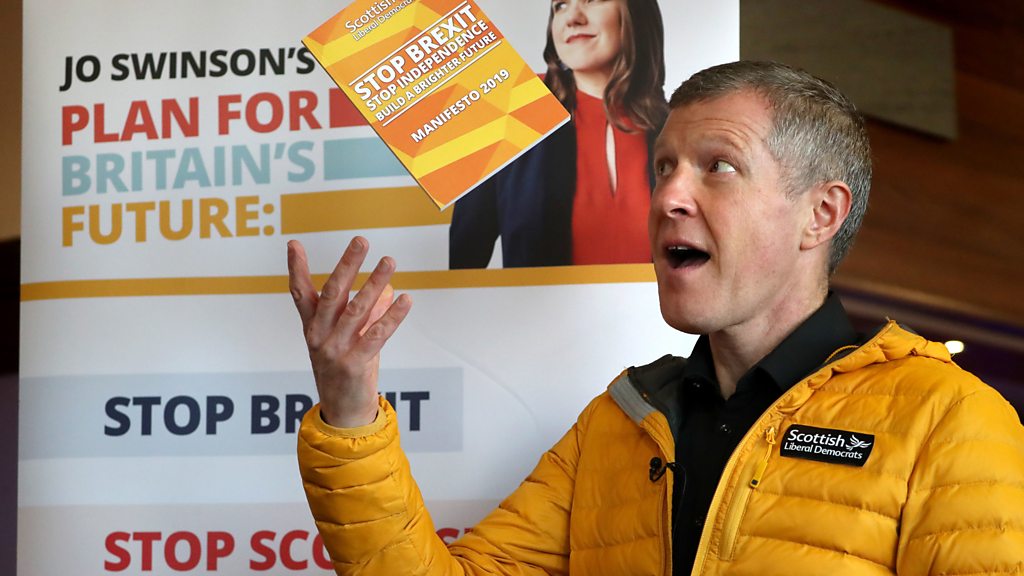 The Scottish Lib Dems have pledged to “build a brighter future” as they launched their election manifesto.

Leader Willie Rennie said his party is the only one committed to “stopping Brexit and stopping independence”.

And he argued that the country needs to move on from “constitutional chaos” and instead focus on the “issues that really matter”.

The party also says it is the only one with a “radical, credible and detailed plan” to tackle climate change.

The manifesto includes pledges to end fuel poverty in Scotland by 2025, ensure mental health was tackled with the same urgency as physical health and give every child 35 hours a week of free care from nine months old to when they start school.

These policy areas are all devolved to the Scottish Parliament, so would need the backing of the Scottish government if they were to be introduced.

The manifesto also contains pledges that the party says would result in £3.4bn extra every year for the Scottish government to spend on public services, and £10bn for infrastructure investment.

Cuts made by the Conservatives to Universal Credit would be reversed, which the Lib Dems say would help people get back into work without losing out.

And the party is proposing a move to a “fairer economy” with more support for small and medium sized businesses and global corporations expected to pay a fairer share of taxes on their profits.

The Lib Dems have highlighted analysis by the Institute for Fiscal Studies which said their UK-wide manifesto would involve lower levels of borrowing than those of either Labour or the Conservatives, but would still be seen as “radical” in “most periods”.

Mr Rennie said: “On the front page of our manifesto it says “Stop Brexit, Stop independence and build a brighter future” and that is what a Liberal Democrat government will do.

“If we make the constitutional chaos stop we can focus on the issues that really matter to people on a day-to-day basis.

“That is treating mental health as seriously as physical health, transforming childcare to give families more choice about the way they run their lives and tackling climate change by insulating homes and boosting support for renewables.”

Writing in the foreword to the manifesto, UK Liberal Democrat leader Jo Swinson said she believes she could do a better job as prime minister than either Conservative leader Boris Johnson or Labour leader Jeremy Corbyn.

She added: “Our country deserves better than what is on offer from the two tired old parties, each led by men who want to reuse ideas from the past – whether the 1870s or the 1970s – and gamble with our children’s futures.”

Ms Swinson said a Liberal Democrat government be “open and generous” rather than “closed and selfish”, and would “build the kind of country and society we deserve, where every person, every community and our planet can thrive”.

READ  Donald Tusk shares note from British child saying UK and EU should 'friends' after Brexit
Share on FacebookShare on TwitterShare on PinterestShare on Reddit
newsgrooveNovember 29, 2019