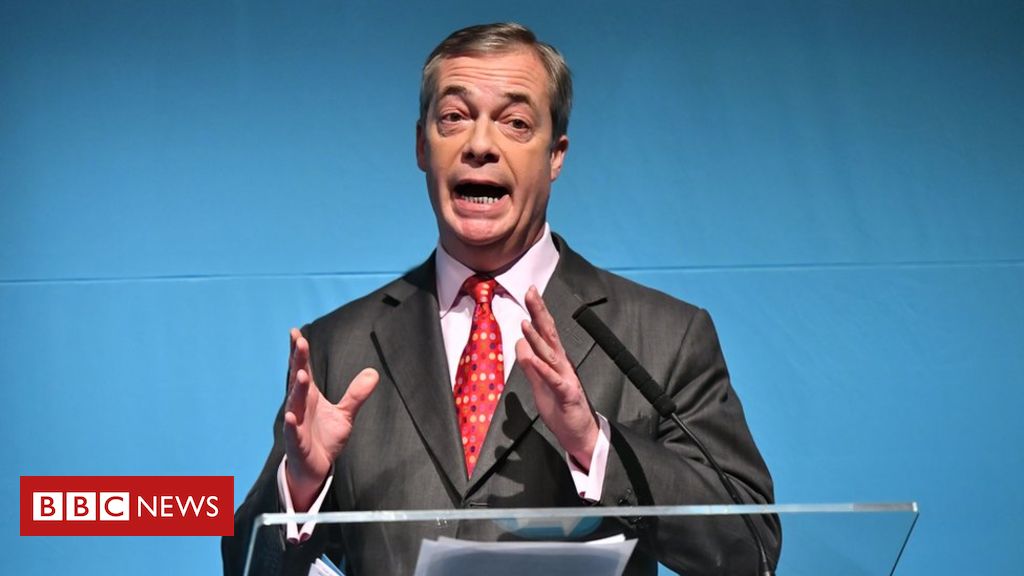 Nigel Farage is unveiling the Brexit Party’s general election policies, promising “fundamental change” for the UK after it leaves the EU.

The party leader has said he will not publish a manifesto, but instead make a “contract with the British people”.

Its main focus is on leaving the EU, but it is also promising action on immigration and the environment.

Among policies already announced, the Brexit Party is offering a cap on permanent immigration of 50,000 a year, the abolition of the House of Lords and a large-scale tree planting programme across the UK.

Mr Farage has also indicated his party will campaign for postal voting to be limited to elderly, infirm and overseas voters, citing “many examples of intimidation and fraud”.

He has pledged a £10,000 allowance for every UK company before they have to pay corporation tax, and said the party would continue to campaign for a “clean break from all EU institutions” after Brexit – with Brexit Party MPs “vital in holding Johnson to his word” in Parliament.

“We see Brexit as the beginning of a real fundamental change, not the end,” he told BBC Radio 4’s Today programme.

Several other political parties have launched traditional manifestos – outlining policy commitments for government – this week, but Mr Farage and his colleagues have declined to do so.

“The word manifesto – I think in a word association test, most people would say ‘lie’,” Mr Farage said. “I think it’s now a defunct word”.

“We are used to, in this modern era of career politics, parties saying things in manifestos that they think the electorate want to hear but without the slightest intention of delivering them,” he added.

“I’m going for a different idea, which is a contract with the people – I think it makes more sense.”

What else is the Brexit Party promising?

Other pledges already announced by the party include:

Mr Farage said his migration cap would return the UK to a “post-war norm” which had “completely gone out of the window”.

“What I think is very real is that we now have in many ways a population crisis in this country. Nobody could possibly have foreseen the massive growth in our population,” he said.

He conceded that temporary work permits could be used to fill job vacancies in professions where there are “genuine shortages”.

He also told LBC his party would propose that the BBC licence fee should be “phased out over time”.

The publication of election policies comes after an anti-Brexit campaign group bought the website thebrexitparty.com and offered to sell it to Mr Farage for over £1m.

Led by Donkeys – known for its posters and stunts – says it will increase the price by £50,000 a day, and if Mr Farage buys it, it will donate the money to the Joint Council for the Welfare of Immigrants.

A statement from the Brexit Party said it had issued a legal letter to the group “requesting they cease and desist from using the Brexit Party logo and Brexit Party materials on posters, document download site and via their website at thebrexitparty.com”.

In manifestos launched this week:

Plaid Cymru is also launching its plans for the election on Friday.

Do you have any questions about the election?

In some cases your question will be published, displaying your name and location as you provide it, unless you state otherwise. Your contact details will never be published. Please ensure you have read the terms and conditions.

Use this form to ask your question:

If you are reading this page and can’t see the form you will need to visit the mobile version of the BBC website to submit your question or send them via email to YourQuestions@bbc.co.uk. Please include your name, age and location with any question you send in.

READ  Defeating the Covid-19 crisis could need a wartime coalition government | Martin Kettle
Share on FacebookShare on TwitterShare on PinterestShare on Reddit
newsgrooveNovember 22, 2019