Gareth Bale is happy at Real Madrid and has no intention of leaving the club in the January transfer window.

That’s according to the forward’s agent, who insists the winger wants to fight for his future at the Bernabeu.

Bale was spotted in London this week, fuelling speculation that he was meeting with representatives of Chinese Super League club Jiangsu Suning.

The 30-year-old agreed a £1m-a-week deal to move to the far-east last summer but the deal fell through after club president Florentino Perez refused to allow Bale to leave on a free transfer.

Bale’s future under Zinedine Zidane appeared bleak but the forward has forced his way back into contention so far this term.

Nevertheless, the pair’s relationship remains strained given how often the Frenchman made clear that he didn’t want to keep the former Tottenham star in the Spanish capital.

But Bale’s long-term agent insists there was nothing relating to the forward’s future in his decision to visit London this week and dismissed renewed talk of a move to China.

‘Gareth is delighted to play in Madrid,’ said Jonathan Barnett.

‘China? Don’t believe everything you hear.’

Manchester United have been long-term admirers of Bale but the level of interest from current manager Ole Gunnar Solskjaer is minimal.

The Norwegian wants to restructure his side around young players and signed Bale’s international team-mate, Daniel James, last summer.

Roger Federer ‘devastated’ as Wimbledon is cancelled due to coronavirus crisis

Wimbledon cancelled due to coronavirus – where does that leave tennis in 2020? 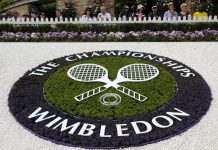 Wimbledon canceled due to coronavirus pandemic

Wimbledon 2020 cancelled due to coronavirus pandemic after crisis talks

Sport shorts: MP blasts Premier League clubs for staff salary cuts and F1 British GP decision will be made by end of April

Champions League and Europa League could be completed in August

Cricket and coronavirus: What will happen with 2020 season?