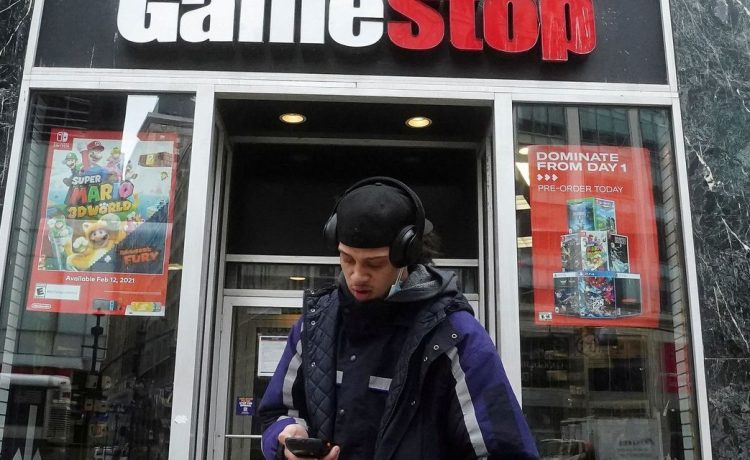 share price this week is adding pressure on the company to deliver a turnaround that can be embraced by more than meme-stock believers.

But a digital transformation for the brick-and-mortar-centric retailer may be tough to execute, analysts say, in part because the game-download market is dominated by console makers

Additionally, the world’s largest tech firms have flocked to cloud gaming, while in-game spending has grown in recent years to contribute the biggest share of the industry’s revenue.

GameStop’s stock skyrocketed in value last month when an online community successfully encouraged hordes of people to buy shares in it and other heavily shorted public companies. Though GameStop’s share price has since fallen dramatically after cresting at $483, it has remained volatile. Friday, shares traded around $110 apiece, more than double last Friday’s close of nearly $41.

A yearslong slide in revenue, executive turnover and strategic missteps have all hurt the Fortune 500 company’s competitive standing. Two years ago, GameStop failed to sell itself and then pledged to become more relevant in an industry that was years into a digital transition.

One of its largest shareholders and newest board members, Chewy Inc. co-founder

is pushing to overhaul the business. GameStop Chief Executive Officer

has said the company aims to be the “leading” retailer across digital and physical channels for all things gaming and entertainment.

GameStop has been a go-to destination in malls and shopping centers for buying games, systems and accessories for decades. But the company has faced stronger competition in recent years from retailers including

and people are increasingly downloading or streaming games online instead of buying them in stores. The coronavirus pandemic has accelerated that trend.

Meanwhile, more developers are making games free to play. Hits such as “Fortnite,” “League of Legends” and “Candy Crush Saga” don’t cost anything to download. But through purchases of virtual goods, mobile games make up roughly half of total annual spending on game software, according to data from game-industry research firms.

Those developments are among the reasons why Mr. Cohen has urged GameStop to reduce the number of its physical stores, focus on improving e-commerce and explore other tech-driven opportunities in areas such as esports, mobile gaming and game streaming. In January, Mr. Cohen joined GameStop’s board and raised his stake in the retailer to nearly 13% from just shy of 10%.

The tech entrepreneur is also shaping internal hiring decisions. The Wall Street Journal reported Wednesday that finance chief Jim Bell was forced out of his role, citing people familiar with the matter. Two associates of Mr. Cohen joined him as new GameStop board additions in January, and one former Chewy executive has joined the videogame retailer’s ranks since then. The company this month also hired its first technology chief, Matt Francis, who previously was an engineering executive with Amazon.com Inc.’s web-services unit.

READ  'The Witcher' Trailer Is Here—and It's Shockingly Good - WIRED

GameStop has a history of making investments in digital technology. In 2011, the Grapevine, Texas-based retailer bought streaming-technology company Spawn Labs and digital game-distribution platform Impulse. It also owned for several years a company called Kongregate, which launched as a platform for web browser-based games and eventually became a mobile-games publisher.

The launch of a game-streaming service was lauded by analysts as transformative and visionary at the time, but it didn’t succeed. “They were on the right path, but it was too early,” said Joe Feldman, a senior managing director at Telsey Advisory Group, an investment banking and consulting firm. GameStop shut down Spawn Labs more than seven years ago, citing lack of consumer demand.

Notes on the News

Today’s headlines, news in context, and good reads you may have missed, with Tyler Blint-Welsh.

GameStop has worked to improve its prospects by closing underperforming stores and paying down debt, but “they have more work to do to stave off the constant migration of game sales to digital downloads,” Wedbush Securities Inc. analyst Michael Pachter said.

Some investors aren’t deterred and argue that GameStop’s future is bright. During a congressional hearing this month on the Wall Street trading frenzy, Keith Gill, who helped drive retail-investor interest in GameStop, said in his testimony that he has been a happy customer for years. “I’m as bullish as I’ve ever been on a potential turnaround, and I remain invested in the company,” said Mr. Gill.

One of GameStop’s defining traits is that it allows customers to trade in used games for cash or credit. Some people say they prefer to buy hard copies of games to take advantage of GameStop’s resale business, while others see physical goods in general as more reliable.

Ryan McIntee, a systems engineer for a financial-services firm, frequently shops at GameStop for new and used games. He said he is concerned that digital storefronts could remove games from their catalogs, making any he has purchased from them—but doesn’t keep on a hard drive—one day no longer accessible.

“Physical is forever,” said Mr. McIntee, who is 28 years old and estimates that more than 1,000 videogames line the shelves of his home in Cary, N.C.

After reporting losses in five of the past six quarters, GameStop has said it expects to post a profit for the quarter ended Jan. 30. Results from the fourth quarter, due out in late March, are typically GameStop’s strongest by revenue and profit; this latest holiday season, Sony and Microsoft both launched next-generation consoles. However, demand for those machines, which come in versions with and without disc drives, has outstripped supply.

Investors will also be waiting to see the costs required for GameStop’s transformation. It reported having about $445 million in cash and cash-equivalents as of Oct. 31, up from about $290 million on its books in the prior-year quarter. The company also has had the ability to sell $100 million of stock since December, though it hasn’t executed a sale even with the stock-price surge.