Game of Thrones star Indira Varma, 47, on how to do Priti Patel’s voice, being baffled by Star Wars and saying no to nude.

You’re in LA at the moment filming Obi-Wan Kenobi. How bonkers is that?

It’s such a beast, like an octopus that needs wrangling but I’m having a brilliant time.

Obviously, I can’t say anything about any of it but director Deborah [The Mandalorian] Chow and Ewan [McGregor] on the acting side have somehow made it feel like an independent movie.

Everyone has input, there are no fraying tempers.

Are you steeped in Star Wars mythology?

It’s all new to me and really embarrassing. I keep getting called out on stuff but I did play Princess Leia in the playground when I was six without having seen it – I had long plaits so I could do the hair.

I’ve watched all the old ones now but I wouldn’t say I’m up to speed. I’m still not sure what order they all go in.

Has Game Of Thrones prepared you for the fans?

I had it easy on Thrones – I didn’t play one of the leading roles so I don’t get hassled much.

Sitcom This Way Is Up is Back. Your character Charlotte has a complicated relationship with Sharon Horgan’s Shona.

It’s unrequited love, sadly. They’ve got great chemistry and they do fancy each
other but life’s complicated.

Why did you want to work on it?

Sharon and Aisling [Bea] are brilliant and I love being on an all-female set.

If you’re on a predominantly male set, you’re more likely to have a blind eye
turned to slightly dodgy behaviour.

That’s not the case with more women on set.

What was the trick to getting Priti Patel’s voice right in the Spitting Image revival?

She doesn’t say her ‘G’s and has that sibilant ‘S’ going on, and a nasal sound
that grates a little.

It’s cathartic to do and there’s lots to talk about with her, that’s for sure. I’ll be doing her and Meghan Markle again for this series, although I haven’t seen any scripts yet.

Who do you play in the new Mission Impossible film?

All I can say is, ‘don’t blink!’ But it was so much fun. Tom Cruise is astonishing,
a dynamo but really lovely as well.

I really sympathised when he went off on one about Covid protocols on
set – it wasn’t about himself, it was about lots of people having families
and not wanting to go home and spread it around.

How have the past 18 months been for you?

I’ve worked a fair bit. I did This Way Up, the second series of For Life in New
York and Faith Healer at the Old Vic, five live shows ‘in camera’.

It was amazing but weird being in an empty theatre performing for more people
than could fit in it.

Did you pick up any lockdown skills?

I had a sourdough starter and killed it very quickly. I gardened a lot as well
– nature has been a constant source of hope.

Being in LA, you don’t see the seasons change but in the UK you get a new
surprise every week.

And out here I had my first surfing lesson! I stood up and actually surfed the wave several times, then as soon as I got back, I slipped and hurt my knee so I haven’t done it since, which is gutting. It could be a promising second career.

What would you have done if you hadn’t been an actor?

Possibly teaching. At school when you’re inspired by teachers you think, ‘I’d like to be that for someone else’, to pass on the stuff I’ve learnt and encourage people to try things.

Now I’m a bit older I can see someone’s potential if they are holding back or they lack confidence.

Entering the professional work arena is demanding for anyone but given the subject matter – the nudity – suddenly being told your body isn’t the right
shape… stuff like that was like, ‘What?’

After that, the type of work that came my way was all the same and not at all what I wanted but I got away from it pretty quickly by just saying no to it all.

Theatre was my saviour then and it still is really.

Have the roles offered to you got better as time has gone on?

I think so. There was time where I thought I’d have to retire at 40 because there wouldn’t be any work but that changed, along with the climate of representation, which means there’s more opportunities for people of colour beyond playing the
‘best friend’.

I’m happy to watch that next generation take over the world. 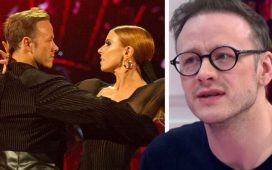 Kevin Clifton on Strictly's need for an intimacy coordinator: 'Who knows how celebs feel!'