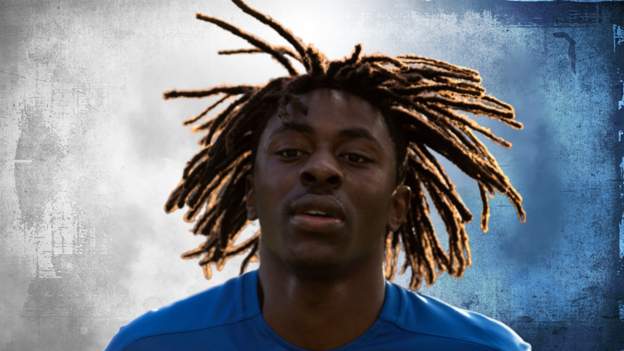 “Every day, you’re learning new tricks and creating your own style of play.”

Overcoming rejection after rejection, Crystal Palace midfielder Eberechi Eze puts his rise to the Premier League down to one thing – ‘the cage’.

It was the first place he and many of his friends went after school, as they grew up in Greenwich. The cages are the small enclosed football pitches in south London that have helped develop many top talents – Jadon Sancho, Wilfried Zaha and Callum Hudson-Odoi among them.

Eze learned to be tough, physically and mentally, and to be skilful. Those qualities served him well as he continued to push for a football career after being released by Arsenal, Reading, Fulham and Millwall.

The 22-year-old has now made it to the Premier League, having joined Crystal Palace from QPR on a five-year deal for £19.5m in August.

As he prepares for Saturday’s Premier League trip to Aston Villa, which will be broadcast live on BBC One, Eze can reflect on how the cage shaped him.

He told Football Focus: “For me, it was a huge thing, being able to take that.

“Even though I was in the academy system, I was still going to the cages to play football. I think it shaped me to become the type of player I am and focus on enjoying football as I did when I was a kid.

“You play with older boys as well. You have to be strong and you have to be better. That was the mentality. If you were small and you were young, you had to try to be the best on the ball. For sure, it shaped us to be who we are as young footballers.”

There are few rules in the cages and players, whether they like it or not, are taught to be resilient. Self-expression is the only way to grab the attention and respect of those watching.

Eze said: “You have to do a lot to get the people on the side to scream – by doing a nutmeg or something like that.

“That’s how I’ve always been. I think growing up in London, with all the cages, everyone thrives off of the nutmeg or that skill; that’s what you want to do. Being able to have the opportunity to do it in the Premier League for me is great.”

Eze’s journey has been far from straightforward; having been knocked back by four clubs, he signed for QPR after a successful trial.

What kept him going? “My family and also my love and enjoyment for playing football,” he said.

“I didn’t want to do anything else and I didn’t see myself doing anything else. For me, it was either do this or… I didn’t have any clue about what I was going to do.”

The attacking midfielder has hit the ground running at Palace, becoming a regular starter and being lauded by fans for his confident displays.

“I think it comes from when you’re young and you’re playing in these cages with older boys and being able to hold your own,” he said.

“I’ve sort of carried that with me and said to myself that wherever I go and wherever I play, I want to play to enjoy myself. I don’t want to put any type of pressure on myself or any restrictions. I want to feel like I’m enjoying myself as I think that’s when I’m most effective.”

Eze is already drawing comparisons with Zaha. Both grew up in south London, both learned their trade in the cages. Both glide past players with ease.

Zaha suggested earlier this month that the two players were in the same “wavelength”; Eze says the Ivory Coast international has been an inspiration to him.

“It’s been a great privilege because of the type of player he is and the type of person he is,” Eze said. “He’s taken to me so well and made it easy for me to settle in.

“Even our little talks and conversations have improved my understanding of what it’s like being a Premier League player and playing for Palace.

“He’s sort of taken me under his wing, which has been good for me. I’m learning from him; he’s such a great player and with such a similar style. I want to look to him and take the positives from doing that and add them to my game.

“It’s fun because it’s always good to have someone that you know that when you give them the ball he’s going to express himself and do what he wants to do. Then when he passes it back, it’s almost like it makes the other person want to do more.

“You’re always pushing each other to do more things on the pitch, which is at the end of the day is most important.”