From Mean Girls To The Meme Monkey: The Best Democratic Presidential Debate Tweets 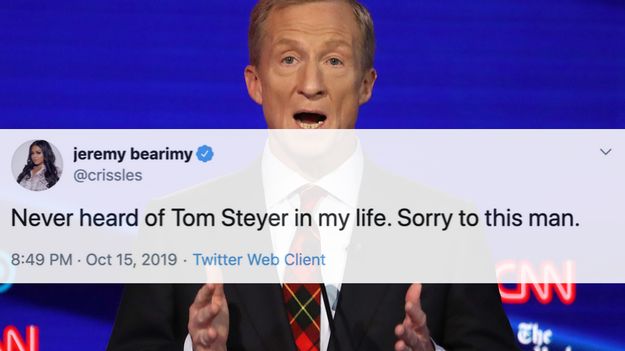 After a temporary hiatus from any and all debate-related memes, we’re back. Tuesday (October 15)  marked the latest installment on this seemingly endless road to win the 2020 Democratic presidential nomination.

Between unexpected sparring and plenty of waiting for candidates to finally address reproductive healthcare, there was certainly a lot to keep tabs on. If you missed a few memes over the three-hour debate, don’t worry — we’ve got you covered. This night was just as eventful as the last, and featured an appearance from a monkey, Mean Girls, and Keke Palmer. Sorry to this man.

Let’s hear it for the suit.

Sure, we are here to hear about the issues, but it’s important that we take a moment to acknowledge some serious debate fashion.

In a truly surprising moment, Andrew Yang was quick to take jabs at Sen. Elizabeth Warren on automation.

OK, but who is Tom Steyer?

Tom Steyer made his debate debut, and yeah, few people knew who he was. For the record, Steyer is a billionaire that spent more than $9 million to earn the support of the 130,000 voters needed to participate in Tuesday’s debate, NBC News reported.

As Yang proved, there’s nothing wrong with a little audience participation.

And now for a special appearance from everyone’s favorite mummified Persian cat.

The debate moderators had questions, and candidates didn’t always have the answers. Thankfully, Twitter used this perfect meme to fill in the blanks.

Why can’t we be friends?

The candidates are there to debate — and dunk on President Trump — but Sen. Cory Booker took some time to spread a little love.

We all have frenemies

Another debate, another use of an unexpected word. Steyer chose to describe our current status with foreign rivals as “frenemies.” I am officially reaching for my choker and heading to the mall.

‘I organised raves in the 1990s — I wouldn’t be putting on parties now’: promoters respond to illegal events during the pandemic

David Bowie: Why were David Bowie's eyes different colours? What happened to them?

BTS to perform at MTV VMAs for first time ever, along with Doja Cat and more

Zoe Kravitz’s High Fidelity series cancelled after only one season