A show that features hip-hop artists performing alongside classical musicians, videographers collaborating with skateboarders, and parkour athletes combining with contemporary dancers represents the heartbeat of a cultural programme energising Lausanne 2020.

We are very proud, it’s a symbol of exactly what we are trying to do, bringing sport and culture together for young people,” Fabrice Bernard, director of Lausanne En Jeux, the Youth Olympic Games cultural programme, said of BodyCity.

The show, next performed at 6pm on Saturday in Lausanne’s Place des Fetes, is the result of more than a year’s planning and features 50 performers giving it their all in a specially built skatepark.

“We’ve got skateboarders, roller skaters, people on scooters, hip hop and classical dancers and parkour [athletes] collaborating to a soundtrack composed by musicians from the city university and with visuals made by students from the art school,” Bernard explained.

“Last weekend we had 2,500 watching each performance, it was so busy the police had to close the bridge overhead for safety reasons.”

The renowned festival organiser has been pouring his heart into Lausanne En Jeux for almost two years and could not be prouder of the 282 performances, workshops and exhibitions he is overseeing.

From the Olympic Museum, which is hosting a circus skills workshop, to the daily half-hour TV show created, filmed and produced by young journalists and shown on local station La Tele, the message is simple and sustained.

READ  Cooking Video Games that Will Teach You How to Cook - GameSpace.com

“It’s an international event but we had to have the local connection,” Bernard said. “It’s all about young people working together and participating. To see it living makes me smile.”

In the first seven days more than 100,000 people took part in aspects of the programme with 25,000 children scheduled to participate during the Games. A budget of 3 million Swiss Francs (2.7 million Euros) has helped ensure events are available across the city throughout the 14 days of Lausanne 2020.

Another of Bernard’s personal favourites is taking place in the Museum Arlaud. It has been renamed Espace for the YOG.

“We show how you make video games from scratch, from the drawings to the music to the graphics,” Bernard said. “We’ve got old school games in there like Super Mario, we’ve got the new generation of games – the idea is everyone can enjoy it and broaden their horizons. I saw a father and son playing together. That is a concrete achievement.”

As well as bridging the gap between generations, legacy is key. Every activity is being taken into schools around the city and the expectation is that many will live on through the young protagonists.

But it is not just the teenagers who are benefitting.

“It is a gift for me to organise this,” Bernard said. “I am 50 and I am learning every day from this programme. It is helping me stay young.”

Video-game programmers want to pump you up – The Hustle

Shouts of “I killed him!” sparked by videogame: Olmsted Township Police Blotter – cleveland.com 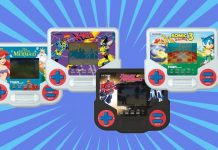 Vintage Handheld Tiger Video Games Are Back. But Which Ones? – Yahoo Lifestyle