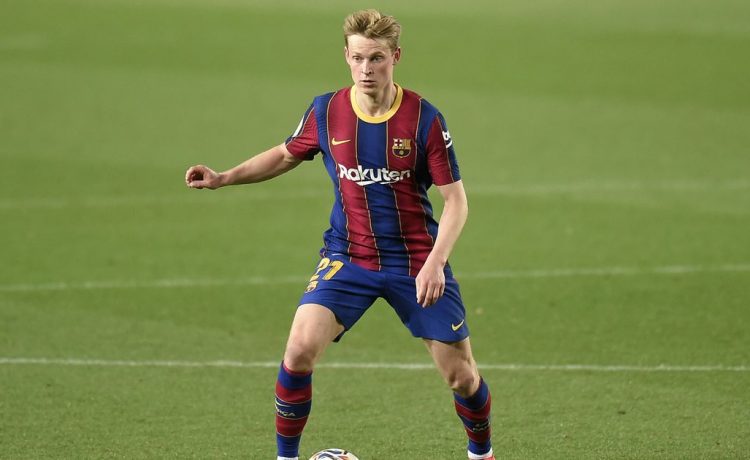 Barcelona star Frenkie de Jong has sent a clear message to Ronald Koeman regarding his best position ahead of El Clasico this Saturday.

De Jong, 23, is a natural midfielder but started his third consecutive La Liga game at centre-back in the 1-0 victory over Real Valladolid on Monday.

The Dutchman has been forced to fill in at the back in the absence of long-serving stalwart Gerard Pique, who has spent much of the season sidelined with two separate knee injuries.

But with Pique having an outside chance of featuring as Barcelona travel to rivals Real Madrid, De Jong is eyeing a return to his favoured role.

“I prefer playing in central midfield, but if it is best for the team that I play at the back or in another position, I’ll do it,” said De Jong.

“We changed the system today and I’ve played in many positions.”

De Jong has racked up six goals and six assists this season, and Koeman’s decision to switch him to midfield in the second half against Valladolid helped Barcelona assert their dominance.

What is your scoreline prediction for El Clasico? Have your say in the comments.

The former Ajax man has been one of the first names on the team sheet under his compatriot, who led his side to a sixth consecutive top-flight win against Valladolid.

The result moves Barcelona to within one point of La Liga-leaders Atletico Madrid and sets up a blockbuster encounter with third-place Real Madrid.

Koeman knows his side will need to show far more intent against Los Blancos than they did against 10-man Valladolid, with Ousmane Dembele’s late goal required to fire the Blaugrana to victory.

“We lacked a lot in the first half,” said Koeman after the match. “We didn’t press them very well. I saw a slow, tired Barcelona from the start.

“We didn’t control the game. So we changed the system and improved in the second half.

“It was a difficult game and we were some way off our level. Real Valladolid did a good job defensively, but you have to know how to suffer and I think we deserved to win.”