Free Britney Spears: What the singer’s conservatorship means and how the #FreeBritney movement developed

The #FreeBritney hashtag has re-emerged on Twitter as fans grow increasingly concerned about Britney Spears and her conservatorship.

In 2008 she was deemed legally incompetent and placed under a court approved conservatorship, restricting her autonomy over her own personal and business affairs.

The 38-year-old pop star is still not legally considered an adult, and her fans are increasingly concerned about her safety and wellbeing.

Here’s what you need to know.

In America a conservatorship is a legal concept which means a guardian or protector is appointed to someone if a court deems them unable to manage their own affairs.

This could be due to being a minor, old age or if the person has a serious mental illness.

Typically the conservator will handle the conservatee’s finances and estate, and might be responsible for negotiating career, health care or life decisions.

In the case of Britney Spears, she had a public breakdown in the late 2000s; most infamously she shaved her head, but was also seen driving with her son on her lap, hitting a photographer’s car with an umbrella and went though a phase of speaking with a British accent.

In January 2008 she was committed to a psychiatric ward under a 5150 Hold – meaning she was taken in involuntarily for evaluation.

When she was committed a second time, her father Jamie Spears petitioned with the Los Angeles County Superior Court to put her under “temporary conservatorship” as an emergency.

This was later made permanent, so her lawyer Andrew Wallet and father have long-term control over her business affairs and assets.

According to court documents, Mr Spears could determine what visitors the former pop star has, as well as determine her career decisions. He’s also been able to file restraining orders against those he suspects are endangering his daughter.

Mr Waller resigned as co-conservator in 2019, and Mr Spears temporarily stepped down to “focus on his health”, with Britney’s so-called care manager Jodi Montgomery taking on the responsibility.

Her conservatorship has now been extended until at least August 22, and fans are campaigning for Britney to have access to her own lawyer.

Britney’s mother, Lynne Spears, has also now asked to be included in the decisions being made about her daughter’s finances.

Why are fans concerned?

The hashtag #FreeBritney has re-surfaced over the past few weeks, as fans are convinced Britney is sending indirect messages via social media asking for help.

One fan asked her to wear a yellow shirt in her next video if she needed help – and the singer did. Another requested she post doves if she was in trouble, which then appeared in one of Britney’s Instagram posts.

Of course, this could be due to coincidence, but a petition requesting the White House investigates Britney’s conservatorship and civil liberties has now gathered over 100,000 signatures.

The #FreeBritney hashtag emerged more than a decade ago in an attempt to rid the popstar from the conservatorship which controls her everyday life.

In the 2008 documentary Britney: For the Record, she lamented that she felt like a prisoner in her life, the first and only time the public has heard her discuss the conservatorship.

She said:“Even when you go to jail you know there’s a time when you’re gonna get out. But in this situation, it’s never ending. It’s just like Groundhog Day every day.”

#FreeBritney started trending again in 2019 when Britney she entered a psychiatric facility to “focus on self-care”.

However, a podcast title Britney’s Gram produced audio of a supposed paralegal, which raised concerns about her safety and wellbeing, alleging she was being held in the facility against her will.

READ  Michael Jackson Accusers Can Now Sue for Sexual Abuse
Share on FacebookShare on TwitterShare on PinterestShare on Reddit
newsgrooveJuly 19, 2020 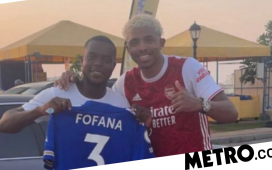