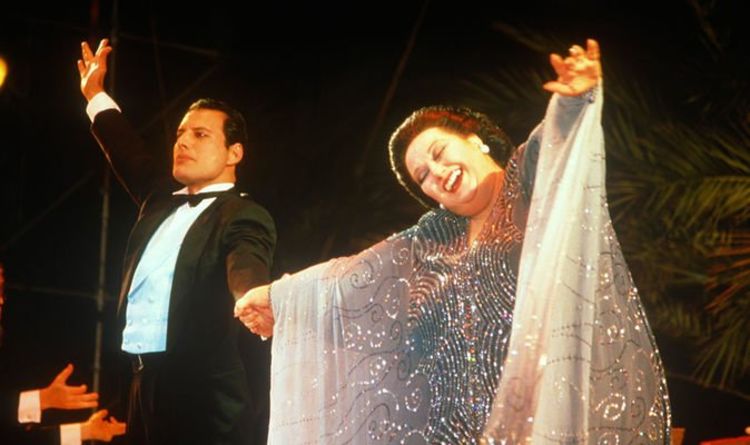 In October 1987 Freddie unleashed an extraordinary new sound on the world with the release of the song Barcelona. Nobody had fused the worlds of rock and opera like that before and it opened the doors for pop and opera crossovers from the likes of Andrea Bocelli, Sarah Brightman and Alfie Boe. But the Queen legend actually first discovered his love for Catalan soprano superstar Montserrat Caballe years before that in 1981 and it changed his life. SCROLL DOWN TO WATCH FREDDIE INTERVIEWED IN 1987

Freddie’s close friend and PA Peter Freestone told the touching tale of the night Freddie discovered a love that would last the rest of his life.

Peter described: “The visit to the Royal Opera House on February 3rd, 1981, for the performance of Un Ballo in Maschera where he (Freddie) heard Montserrat Caballe for the first time.

“It was a pure joy to see the wonderment on Freddie’s face after she had finished singing in the trio during Act I.

“Freddie just couldn’t believe what he had heard and said then he had just heard the greatest voice in the world.”

Peter added: “You should also remember we had gone to the opera that night to hear Luciano Pavarotti sing, but he very quickly took second place in the voice stakes.”

From that day on, Freddie regarded Montserrat as the greatest singer alive.

He never dreamed that they might make music together until he was asked during an interview on Spanish television who he would most love to sing with. Of course, he answered Montserrat Caballe.

Word got back to the opera icon and she put things in motion that lead to their legendary collavoration.

In one of his last-ever recorded interviews, Freddie described his extraordinary joy when Montserrat called him out of the blue.

Montserrat talked about the experience of working with Freddie, and how she believed he was good enough to ing pure opera but teh Queen star refused.

READ  Angie McMahon: 'I was super-reclusive, now I’m out in the world. Welcome to my anxiety'

She said: “More than love, I think he felt an admiration that I could do things that probably he would have liked to do, because some of them he could.”

“When I said to him in his London home, ‘Why don’t we record a duet for baritone and soprano?’, he said, ’No, because people would see me sing for real.’

“I suggested we sing the aria from La Traviata between the father and girl because it’s for a baritone, but he told me no, that it would seem as if he was betraying his public and his fans.”