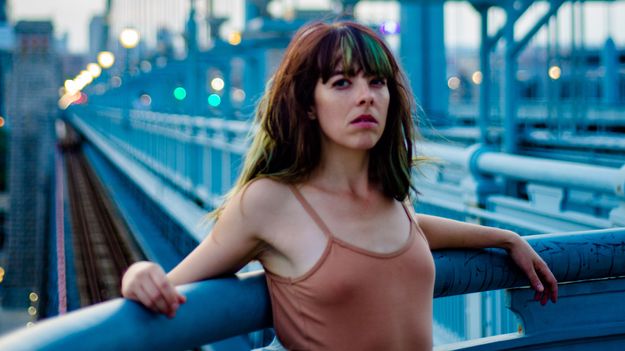 Among the imagery Frances Quinlan evokes on her new album Likewise, the first is the Piltdown Man, one of the most infamous scientific hoaxes of all time. After amateur archaeologist Charles Dawson “discovered” the remains of a missing link between ape and human in 1912, it took 40 years for his findings to finally wilt as fraud under scrutiny. “Why would he do such a thing?” Quinlan sings, then re-examines: “Of course, what a stupid question.”

Glowing, literary moments like this — the kind that make you listen closely and hit repeat — garnish her songwriting catalog with Hop Along, the Philadelphia band with whom she’s made three exceptional LPs. They rock, first of all, anchored by Quinlan’s deadliest asset: her voice. It’s capable of immense power and grit, yet its grace will disarm you. “I do tend to agonize a bit, one might say, over vocals,” she told MTV News.

Likewise, the first album she’s ever released under her own name, utilizes that voice, of course, and builds songs around it. When Quinlan examines cannibalism for the first of two times on the album, her pitch rises like a figure on a high cliff, surveying the splashes of harp, violin, and cello below. These nine tracks also spotlight her writing chops, throwing strong tags around the rich lyrical images she deploys from her journals (she kept seven in 2018 alone) and the ones she uses to try to get out of her own head. The Piltdown Man skull. A hawk’s quick kill. Scraping brain-roach removal.

“Those pieces of information for me help serve as a reminder that the world is far bigger than I am, and it’s been around much longer than I have,” Quinlan said. “Maybe that’s being a bit too mystical than what it really is. I just hear things that just stick with me as well. There are instances that are so visual or so horrifying, or so moving that, yeah, if they stick with me long enough, part of me just can’t help but think it belongs somewhere.”

One of these arresting scenes haunts “Your Reply,” where bouncy piano soundtracks a moment of chaos. “The author I read fell from a window, many stories high / Stretching out to feed pigeons or a stray cat, depending on the website,” she sings like she’s explaining a moving Wikipedia entry. You want to know more. It’s the same casual specificity that made me devour the biography of unlucky folk singer Jackson C. Frank, who came up with Paul Simon in England but died penniless and plagued by health issues at 56, after she painted it on Hop Along’s “Horseshoe Crabs.”

On Likewise, these pat little bursts of vivid imagery appear like road signs on a long drive where driver and passenger know each other too well. They get fidgety and start picking at old wounds. Some songs are solo rides, and the battles are all inner monologue. “It’s been a long time since we argued and that argument ended,” she sings on “A Secret.”

That mostly acoustic song actually had plans to appear on the last Hop Along LP, 2018’s Bark Your Head Off, Dog, along with similarly sparse “Went to LA,” but the resulting 11-song tracklist would’ve necessitated a double-album pressing. Quinlan axed both. “It just didn’t make any sense to me to take any full-band song off,” she said, so she kept the two solo recordings she knew were “so strong” and followed the energy. “It kind of lit a fire under me that maybe it was time to try making a record that kept the songs a little more close to their original form, which is not usually the case for Hop Along,” she said. “We are a group of heavy editors.”

Quinlan studiously edited Likewise herself, often before she laid down final takes. She wrote the keyboard parts for “Your Reply” in her living room, practicing an instrument she’d ditched as a kid. She tried out drums. Though the two tunes at the album’s origin feature little more than Quinlan’s voice and guitar, “the term ‘folk’ wasn’t really coming to mind,” she said of the album’s sound, which melds synth tracks (“Rare Thing“) and lush strings (“Lean”) with a downright Cubist Built to Spill cover.

All the songs began on guitar before they ventured into more experimental arrangements with production help from Hop Along bandmate Joe Reinhart; the variegated “Now That I’m Back” is a microcosm of the entire process. Likewise also features contributions from fellow members Tyler Long and her brother Mark, among others. “Hop Along is still a very active band,” she said, which led to an urgency to complete her own album.

Any completed Frances Quinlan album requires Frances Quinlan-painted cover art. For her solo debut, she referenced Joni Mitchell’s Clouds, another self-portrait, and marveled at both Mitchell’s confidence and her “oracle” aura. “The usual approach [for a solo album] is to have a photograph portrait, and I just couldn’t feel comfortable with that,” she said.

She’s been painting since before she made music, and while she considers music her career (she’s designed band merch and the Hop Along album covers), she treasures visual art as a way to create something with “a much simpler value to it.” The Likewise cover went through three or four attempts before it felt right. She sought a likeness that captured her own fear — scared, but not too scared.

“I knew I didn’t want to look calm and collected because I just do not see myself…” she pauses, then completes the thought, “I don’t know anyone who would describe me in either of those terms. That’s another funny thing about portraits for albums: The people you see on record covers always seem to me to look so wise and knowing of something. I just do not see myself that way.”

Likewise proves it’s actually quite easy to see Quinlan that way. On “Went to LA,” one of the tunes that kicked off this whole enterprise, she imbues a knockout bit of writing like “The cannibal dragged his son into the kitchen / Outside, the deaf man fled the barn, abandoning every father’s image” with the same warm hospitality you’d extend to a road-trip companion as you hand over the aux cord. She knows something: the motivation behind paleontological forgeries, why we eat each other, how heaven is a second chance. She knows it all belongs somewhere.

The Saunderson Brothers keep it in the family with their new release, Signature Move