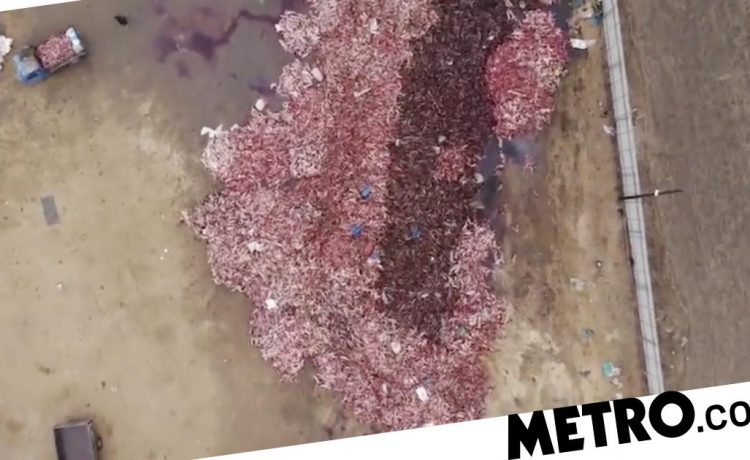 This harrowing footage taken from an Asian fur farm shows a heap of skinless foxes who lived miserable lives and died long and painful deaths.

Activists filmed the animals being repeatedly bludgeoned on the head with metal bars, while others were cut with knives or even entirely skinned alive. Wildlife presenter and campaigner Chris Packham described the footage as ‘like a scene from hell’ and has urged anyone who knowingly wears fur not to ignore what’s happening.

FInvestigators for Humane Society International (HSI) filmed at 11 randomly selected fur farms in one of the top Asian countries exporting to the UK. The charity chose not to reveal the country in order to protect the identity of the investigators.

These animals were clubbed repeatedly in the face, causing extreme pain but not instant death while some were cut and skinned alive in front of their cage mates. Many of them demonstrated repetitive behaviour showing signs of the mental distress they were in.

Despite the UK having banned fur farming nearly two decades ago, Britain still allows imports of tens of millions of pounds of fur every year from farms overseas in countries such as Finland, Italy, Poland, mainland China, Hong Kong, India and Thailand.

In 2018 fur imports to Britain totalled £70.4 million, including over £5.3 million direct from China alone. According to HSI’s estimates, this means 2.5-3 million animal pelts are brought into the UK each year.

Worldwide more than 100 million animals are killed for their fur every year, including mink, fox, raccoon dog, chinchilla and coyote. Campaigners say that’s equivalent to three animals dying every second.

On top of that the number of rabbits killed for their fur is likely to be in the hundreds of millions. While most British retailers actively chose to be fur free, clothes shoes and accessories using pelts can still be found on sale on the high street and online.

In February, Metro.co.uk reported coats, hats and handbags with real animal trims were slipping through the net and making onto the shelves of TKMaxx, despite their policy banning it.

Now HSI UK is calling on the British Government to end its ‘double standard’ by allowing the sale of fur deemed too cruel to farm at home. Executive director Claire bass said: ‘Behind the PR spin of the fur trade, this is the hideous, heartless reality they don’t want you to see.

‘Raccoon dogs driven mad with boredom in their pitifully small wire cages, foxes repeatedly smashed over the head with a metal bar in front of their terrified cage mates, animals skinned alive so that the fur trade can sell consumers the lie of luxury.

‘I am sickened and heartbroken by what our investigators witnessed on these cruel fur farms, but not surprised.

‘It needs to stop, and the UK is now in a unique position to take action by banning fur sales. This – and every – investigation into the fur trade shows that fur is not glamorous, it’s grotesque, it’s cruelty not couture, and it’s time for the UK to stop trading in such horrors.

‘In taking control of our markets and laws post-Brexit the government will have the power – and the moral duty – to send a clear message that the UK will no longer tolerate the cruel fur trade.

‘Cross party support for a UK ban on fur sales is already strong, and we now need a sign that the government will act.’

After watching HSI’s video, TV wildlife presenter Chris Packham said: ‘I am astonished at the depravity of the fur trade. This investigation is like a scene from hell and anyone who knowingly wears fur should not turn away from watching it.

‘Aside from the unbelievable cruelty of their deaths, these foxes and raccoon dogs will have endured utterly miserable lives. In the wild they would roam and hunt for miles with all the sights and smells of their natural environment.

‘Natural behaviours like digging for foxes are absolutely essential for their mental wellbeing, and yet on fur farms they are confined day in day out in barren battery cages.

‘It is little wonder that that unrelenting deprivation can lead to the tell-tale signs of mental disturbance. There can be no place in British shops and wardrobes for fur, not when this is the price that animals pay.’

Humane Society International UK is leading the #FurFreeBritain campaign to take fur off the high street for good and is calling on the Government to fulfil its pledge to make the country ‘a world leader in animal welfare’.

Their calls are being backed by a number of celebrities including Alesha Dixon, Paloma Faith, Sir Andy Murray OBE, Brian May CBE, Dr Jane Goodall DBE, and Joss Stone.

Shadow Secretary of State for Environment, Food and Rural Affairs Luke Pollard said: ‘The animal suffering revealed in HSI’s investigation is truly sickening. This outdated and unnecessary trade should have no place in the UK’s fashion industry.’

READ  Genomes of two millipede species shed light on their evolution, development and physiology
Share on FacebookShare on TwitterShare on PinterestShare on Reddit
newsgrooveJuly 8, 2020