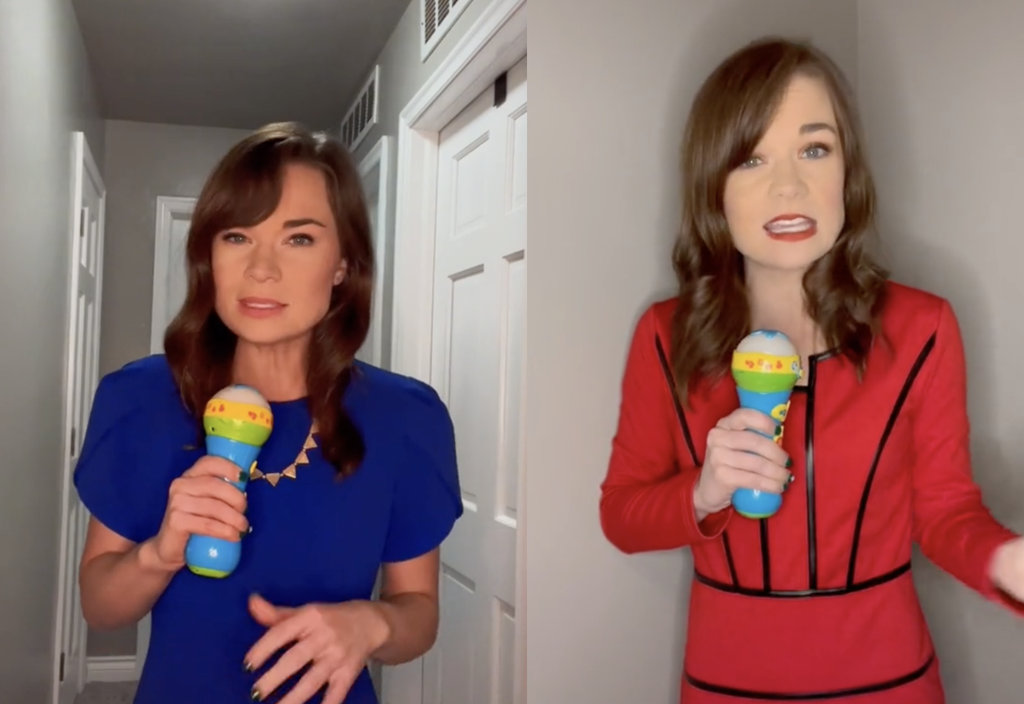 A former TV news reporter has used her storytelling skills to document her son’s latest tantrum to the amusement of viewers.

In a 2 January video posted on TikTok, Kayla Sullivan, a former Fox anchor, gave a recap of her son’s outburst at a restaurant. The caption says: “Now accepting donations for babysitters & or take out!”

“Reporting live from outside my son’s bedroom where he is currently being detained until naptime is over,” Sullivan said in the clip, as she spoke into a toy microphone.

“What I can confirm is my son is a two-year-old terrorist who held me hostage at the Olive Garden earlier today,” she continued.

She also joked that all of the friends that she met at Olive Garden didn’t have children and likely “never will after witnessing this situation first hand”.

“This is an active investigation, but authorities believe the proper precautions were taken,” she explained. “I brought my son’s favorite snack and even risked judgment from other moms by bringing an iPad.”

In the video, Sullivan then went into detail about the circumstances surrounding her son’s tantrum, explaining: “After several cries, demanding quote ‘chetchup, chetchup!’ a good Samaritan waitress miraculously understood it as the English word ‘ketchup’ and brought him a bottle. Unfortunately, her good deed was later punished after he threw a ketchup-covered fork at her.”

“Not all heroes wear capes, but this one should have worn an apron,” she said about the waitress.

The news anchor then joked that “these toddler outbursts are becoming increasingly common as more and more parents try out the new craze, gentle parenting and completely suck at it”.

The video has since been viewed more than 19.6m times, with viewers expressing how much they loved and laughed while watching it.

“This is an A+,” actress Alyssa Milano wrote.

“AHAHHAAHHA this needs to be a whole series,” another viewer wrote, while someone else said: “This is so accurate and hilarious omg.”

Other viewers applauded Sullivan for her reporting skills. “Not sure what was better, the writing, the delivery or the voice. I’ll go D) all of the above. Phenomenal work,” another person wrote.

“Everything in a news anchor’s voice just makes it feel right,” someone else commented.

On 6 January 202, Sullivan shared a follow-up video, where she interviewed the friends who saw her son’s tantrum at the restaurant. She spoke with two friends, who she joked were quite judgemental.

The first friend, “Tammy,” went on with the skit and told Sullivan that she should have “slapped her child.”

The clip also showed another friend, “Karen,” who joked that Sullivan shouldn’t have “rewarded bad behaviour with ketchup.” She also playfully said that moms “don’t get embarrassed” or “care what other people think about [them].”

“I don’t like to ruffle feathers but… JK I’m a news reporter of COURSE I love ruffling feathers,” Sullivan wrote in the caption.

Speaking to The Independent, Sullivan said that the video was inspired by the TikTok trend where one is using their “best news anchor voice to narrate” themselves “doing something super mundane around the house.” She noted that the video about her son’s tantrum was meant for humour, but based on true events.

“It was meant for humour so even though most of the stuff has happened at one time or another, it didn’t exactly happen in the order I reported it since it was merely a way to make people laugh and relate to this parenting experience,” she said.

“I’m a former TV news reporter so I tried making it sound as legitimate as possible using the analogy of a terrorist holding me hostage,” she said. “He’s not actually a terrorist, he’s actually the sweetest! But he’s a toddler and toddlers throw tantrums. Unfortunately, they are way more embarrassing in public.”

She also explained that she always discusses her son’s “bad behaviour with him,” adding: “I explain to him why that isn’t the way we handle those emotions. We sing a little breathing song. Typically I bring him out to the car for the remainder of his tantrum so people can enjoy their dinner!”