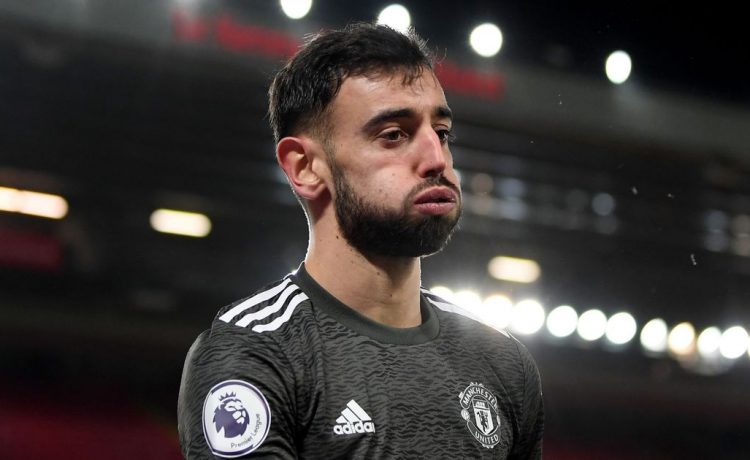 Bruno Fernandes issued a defiant message after failing to live up to his usual high standards in Manchester United’s draw at Liverpool.

United stayed top of the Premier League after holding their rivals to a 0-0 draw at Anfield on Sunday – but it could have been so much better for Ole Gunnar Solskjaer’s side.

Paul Pogba missed a glorious chance to give his side the lead when he fired straight at Alisson.

And a below-par Bruno Fernandes was also denied by the Liverpool keeper after arriving onto a cutback from Luke Shaw, who was United’s best player on the day.

Afterwards, Red Devils boss Solskjaer said he was “disappointed” after his side missed a chance to open a gap over Liverpool, who remain three points behind.

But Fernandes took to Instagram to send fans an upbeat message.

The Portuguese star posted a picture of himself looking frustrated at Anfield, along with a caption which translated as: “One day when you look back, you will see that the most beautiful days were the ones you fought.”

Fernandes may mean that he and his team-mates will learn from a performance against their fiercest rivals which they know could have been better.

Or he may be indicating that, in the long run, a point at the home of the defending champions could prove crucial in United’s quest for a 21st top-flight title.

Solskjaer acknowledged that the point might be “okay” – as long as his side beat Fulham at Craven Cottage in their next outing on Wednesday.

“A point might be okay if win the next one,” the manager told Sky Sports .

“I think we grew in the game and toward the end it was there for us to win. We created two massive chances and it was two brilliant saves by the keeper.

“We can play better than this, we know that. We can be more composed, we can have the ball more.

“We had to defend really often. I thought we gave the ball away too often. Some moments we miss, when Marcus [Rashford] makes his runs in behind.

“Maybe we don’t pass it every time he runs and sometimes we miss it when he should have had it. So, a couple of things we need to improve on.”