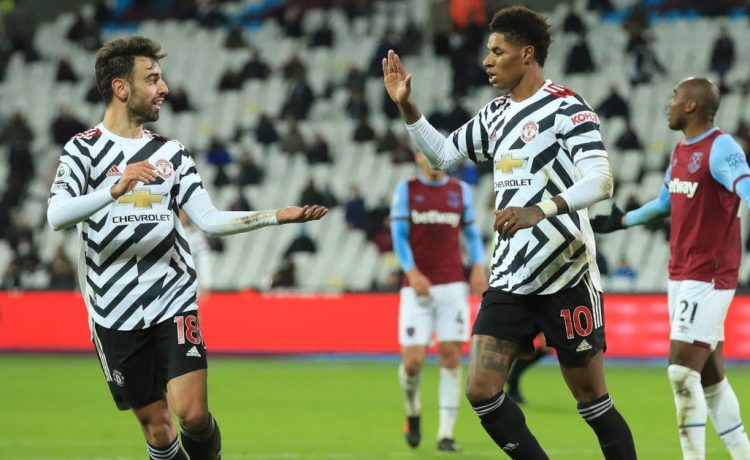 Bruno Fernandes fired a warning at Marcus Rashford after the striker hit the post in Manchester United’s comeback win over West Ham.

And their win owed much to the half-time introduction of Fernandes and Rashford after United had fallen behind following a dire first-half display.

Trailing to Tomas Soucek’s goal after the Red Devils had fallen asleep for corner, United were a different prospect in the second half thanks to the creativity of Fernandes and the movement and energy of Rashford.

After Paul Pogba had equalised with a long-range rocket, Mason Greenwood gave United the lead with an exquisite turning shot from an Alex Telles cross.

Fernandes had a hand in both goals – and looked to have set up Rashford for a third with a sublime through-ball before the striker lashed his shot against the post.

Rashford was to get his goal eventually, netting after a superb ball over the top from Juan Mata to cap United’s comeback.

But the ultra competitive Fernandes made it clear his team-mate after the game that he didn’t like being robbed of an assist.

The midfielder posted a picture of himself and Rashford celebrating on his Instagram story, along with the caption: “If you miss a chance like that again you know what will happen.”

One supporter wrote: “Honestly, his competitiveness is manic. It’s insane how much of a winner he is. He’ll drag the team to the top if he has to. Infectious personality.”

Another said: “Check out the replays for Greenwood’s goal. Fernandes celebrates like a madman the second the ball goes in.”

And one fan compared him to United icon Roy Keane, whose intense will to win was legendary.

“Been waiting for a player like him since Keane. Win or die trying,” the supporter wrote.

Fernandes had initially been benched for the West Ham clash with big games coming up against RB Leipzig and Manchester City.

But his impact after being brought on for the second half shows just how important he is to United.