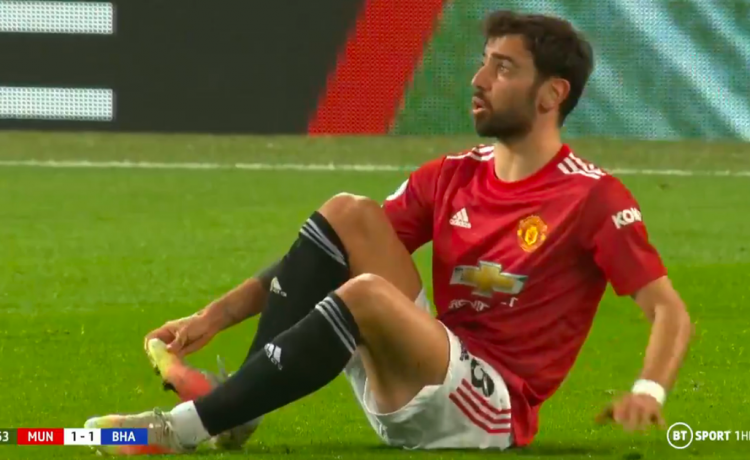 Manchester United returned to Premier League action this weekend with a win by the slimmest of margins at Old Trafford.

The Red Devils were second-best in the opening 45 minutes with the away side firmly on top.

Graham Potter’s men were rewarded for their efforts with a goal from Danny Welbeck against his former side.

But United cranked up the pressure after the second half whistle with Rashford getting his side a much-needed equaliser when Ole Gunnar Solskjaer needed it the most – just after the hour mark.

The Englishman was set up by Fernandes, who was given a mighty whack for his troubles from Joel Veltman.

As Rashford celebrated with Edinson Cavani, the Portuguese midfielder was left to nurse his ankle.

And Mike Dean got an earful from the 26-year-old as a result, who failed to book Veltman for his shocking challenge.

Mason Greenwood went on to score the eventual winner with ten minutes to go after a diving header from a Paul Pogba attempted shot.

The result helps consolidate United’s grip on a top-four spot in the Premier League with the likes of Leicester, Chelsea and Tottenham all dropping points.

They are now 11 points clear of fifth-placed Spurs while the title remains a distant horizon with Manchester City 14 ahead.

“We have had good results and we’ve had to earn them the hard way – we managed to find a way in the second half.

“Mason [Greenwood] was mature. Today he was one of our brightest players.

“He was clean, he was tidy and he got the goal. It’s a header inside the six-yard box and that’s what we need more from Mason.”