A federal judge has temporarily stopped Alabama’s attempt to effectively ban abortions in its tracks for the time being in a Tuesday order.

Alabama’s Human Life Protection Act, which would make it a felony for a doctor to perform an abortion unless a woman’s life was in immediate danger, was slated to take effect on November 15.

Judge Myron Thompson’s order came in response to a lawsuit filed by the American Civil Liberties Union (ACLU) and Planned Parenthood, claiming that the legislation is unconstitutional.

The order, from Judge Thompson of the District court for the MIddle District of Alabama, will put the Human Life Protection Act on hold, with the expectation that the suit reaches the Supreme Court, AL.com reported.

For the time being, the ruling means that abortion remains legal in all 50 US states as established by the landmark Roe v Wade Supreme Court case. 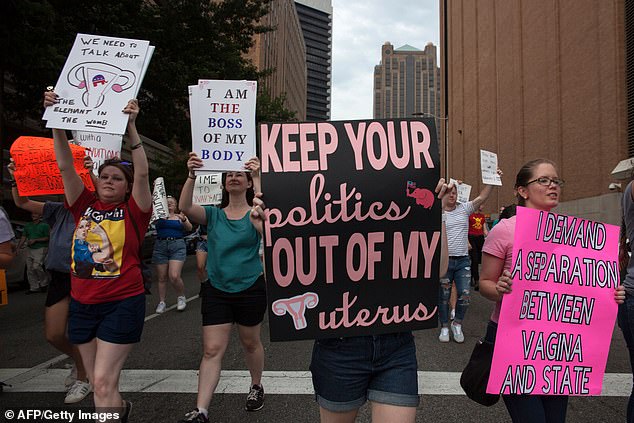 A federal judge has temporarily blocked a law making it criminal for doctors to perform almost all abortions in Alabama from taking effect next month. Pictured: protesters rallying against the law in Alabama in May when the Human Life Protection Act was passed in May (file)

Should Alabama prevail, the now-stalled law would make it the first state in the US where abortion is illegal.

‘The court is persuaded that the plaintiffs are likely to succeed in showing that the Act violates an individual’s constitutional right to obtain a pre-viability abortion, and thus that it violates her constitutional rights,’ said Judge Thompson in his order for a preliminary injunction against the legislation, according to AL.com.

READ  This is what cocaine does to your brain

Signed into law on May 15, the Human Life Protection Act is the closest thing the US has seen to a total ban on abortions since the 1973 Roe v Wade Decision.

Alabama’s law would make it a felony, punishable by up to life in prison, for a doctor to perform an abortion at any stage of abortion unless the fetus was likely to be stillborn or die shortly after birth, or if pregnancy put the woman’s life in grave danger.

It does not include exceptions for rape or incest.

Despite widespread outcry, protests and a fierce debate, the bill passed the Alabama House and Senate handily and was signed into law by Governor Kay Ivey on May 15, the day after it was green-lighted by the Senate.

As its done against other laws narrowly restricting abortions – including so-called ‘heartbeat bans’ passed in Georgia, Texas, Missouri, Louisiana and other states – the ACLU wasted no time in filing suit against Alabama.

Tuesday’s injunction will ensure that the suit can move forward and upward through the court system – including, quite possibly, the Supreme Court – before coming into effect.

Alabama Attorney General Steve Marshall has long been prepared for that possibility.

In no uncertain terms, he responded in August to the ACLU and Planned Parenthood suit, announcing that he had every intention of challenging Roe v Wade.

Judge Thompson’s order suggests his skepticism that Marshall and Alabama will succeed – a sentiment shared and echoed by executive director of the ACLU of Alabama, Randal Marshall.

‘As expected, the court has blocked the law and it will not go into effect. Abortion remains legal in Alabama,’ he told AL.com.

Staci Fox, president of Planned Parenthood Southeast Advocates said the order is a ‘victory for the entire nation.’

It comes as a Missouri hearing this week weighs the fate of the state’s last abortion clinic.

The injunction does not represent a final ruling from Judge Thompson, and the case will continue in his courtroom.

Once it is decided, Alabama or the ALCU and Planned Parenthood will almost certainly appeal it to Eleventh Circuit appellate court.

If, once again, the parties are dissatisfied (as they’re expected to be), they can then appeal to the Supreme Court via a petition for writ of certiorari.

If granted cert, the case would go before the nine Justices of the Supreme Court and could be the vehicle by which the highest court in the nation revisits Roe v Wade.

Immunity to Covid-19 may be lost in just a few months, new research suggests