Top infectious disease expert Dr Anthony Fauci warned that the ‘divisive state’ of the US is getting in the way of the nation’s coronavirus response during an interview with the Daily Show’s Trevor Noah.

‘One of the things that gets in the way is that we are in such a divisive state in society that it tends to get politicized,’ Dr Fauci said.

‘People take sides, like wearing a mask or not is a political statement and that’s really unfortunate, totally unfortunate, because that is a purely public health issue, it’s not one side against the other.’

Noah noted the confusion and contradiction seeming to arise between various top health officials and agencies, as well as between those groups and the president.

‘There has been switches in how the messages have gone out,’ Dr Fauci acknowledged.

It comes after the Centers for Disease Control and Prevention (CDC) issued guidance and then retracted it – twice – while Americans try to work out what is and isn’t safe to do, whether there will be a vaccine this year, and whether that will be safe. 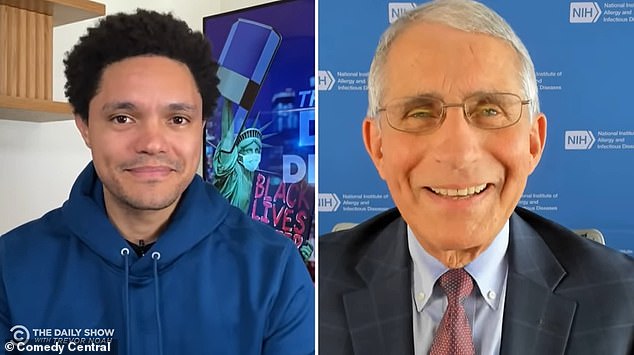 When asked by Trevor Noah (left) about the mixed messages surrounding coronavirus, Dr Anthony Fauci (right) said that part of the problem was the ‘divisive’ state of the US

These divisions and mixed messages come as an already tense political climate in the US heats up ahead of the November 3 election.

Meanwhile, the coronavirus death toll is on the verge of reaching 200,000 in the US.

Noah pointed out that many in the public look only to the death toll as a measure of the pandemic’s grip on the US, while ignoring case increases.

That includes Trump, who said on Monday night that the virus ‘affects virtually no one’ while the largely maskless crowd at his rally booed face covering mandates.

Fauci acknowledged that the daily case numbers in the US are significantly lower than they were during the summer – but said that doesn’t mean they’re low enough.

‘Some of the numbers are really good but our baseline is still really high. When we tried to open the economy, some people jumped ahead.’

Much of the country began reopening as early as May, when stay-at-home orders issued during the March surge of cases expired.

Since the July peak (when the US was logging 70,000 cases a day), the numbers of new infections have fallen – but winter could easily change that.

Heading into winter, when outdoor activities will be a less reliable option, ‘you want to start off with the lowest possible baseline [of daily infections] you could possibly have,’ Dr Fauci said.

‘What I’d like to see over the next several weeks, is the whole country pulling together to try to pull that baseline down, so when we go into fall and winter…we’re not at a disadvantage.’ 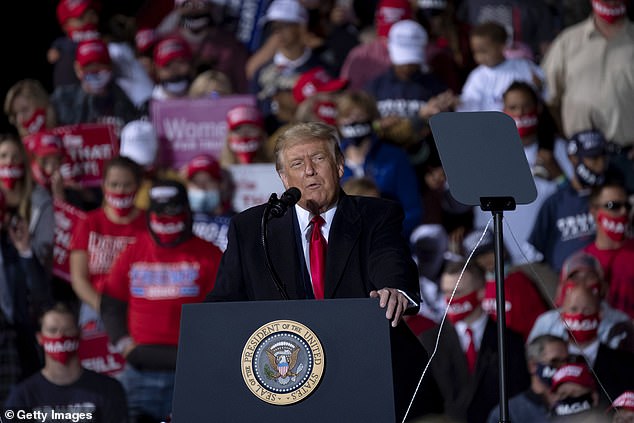 Trump (pictured): ‘In some states nobody young. They have a strong immune system – who knows. Take your hat off to the young because they have a hell of an immune system. It affects virtually no one’

READ  NHS to open first ever gambling clinic for children

During his Toledo, Ohio, campaign rally on Monday night, Trump incorrectly claimed: ‘now we know it affects elderly people. Elderly people with heart problems and other problems. If they have other problems, that’s what it really affects. That’s it.’

‘In some states nobody young. They have a strong immune system – who knows. Take your hat off to the young because they have a hell of an immune system. It affects virtually no one,’ he said.

He added bluntly: ‘Open your schools.’

Not unsympathetic to the desire to get kids back to school and adults back to work, Dr Fauci noted that health measures like masks and social distancing are not recommended in an effort to prevent people from working or going to class, and in fact are intended to do the opposite.

‘Everybody feels that we need to open the economy to get people back to work and back to school,’ he said.

‘And when you don’t have a single message, then message get sort of thrown into political buckets, but public health measures should be more of a gateway or a pathway to opening the country, not an obstacle.

‘When I’m telling people, “wear a mask, practice social distancing, wash your hands, avoid crowds, do things outdoors more than indoors,” there’s nothing political about that, that’s a public health message, and we know it works because every time you’ve had a group of individuals that has done that, when you have a surge of infections, the surge has come around and come down.

‘So we have it within our capability the ability to turn this around.’

Equality gains in the UK risk being reversed by coronavirus, says EHRC

How can the elite demand we follow the rules when it’s one set for them and another for us?

Do you encounter this issue when speaking? Your blood pressure could be dangerously high

A doctor's advice on the UK's most searched embarrassing health concerns