The Fast and the Furious: Moon Drift?

Once upon a time, the Fast & Furious franchise followed a group of street racers who stole DVD players. Fast-forward 18 years and spinoff Hobbs & Shaw features Idris Elba as “Black Superman.” And in-between, cars have flown, submarines have emerged from ice, and torpedoes have been redirected by Dwayne Johnson’s bare hand.

So where could the franchise possibly go next? While insisting he would never do something that takes the audience out of the action, Chris Morgan, the writer behind Hobbs & Shaw and five other Fast films, won’t close the door on launching the Fast family off of Earth.

“I would never shoot down space,” Morgan tells EW. “Never, never. I would literally never shoot down anything, as long as it hits the parameters: ‘Is it badass? is it awesome? Will the audience love it? And will it not break faith with the audience as they’re watching it?’ I’m down for whatever.”

You know what Dominic Toretto (Vin Diesel) always says: “I don’t have friends, I got aliens.” 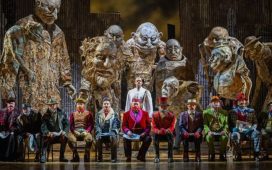