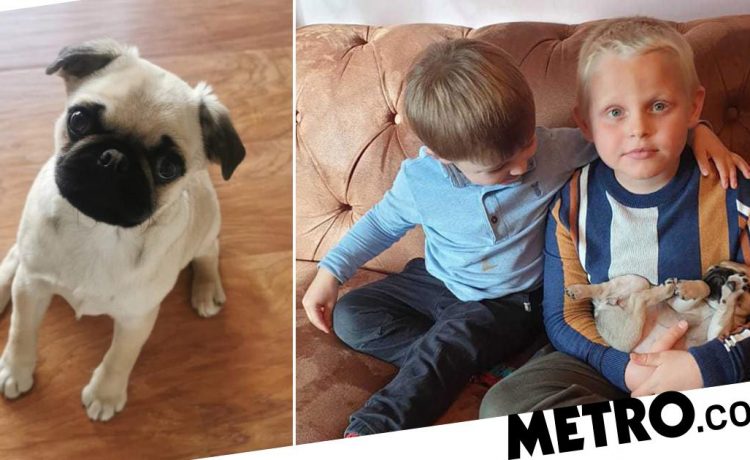 A distraught dad has revealed how Christmas was ruined after the family’s pet puppy choked to death in front of his ‘traumatised’ little boys.

Kieran Elsby, from Bridlington, tried desperately to save their five-month-old Pug Peppa as she started choking on Christmas Eve.

Kieran’s two sons Noah, six and Oliver, three, were screaming as he made the futile attempts to save the little dog.

The toy that Peppa choked on was a £7 Nylabone Puppy Triple Bone Starter Kit, which Kieran bought from his local Pets at Home store. He says he was told the toy was safe by staff, but the puppy died suddenly just after she started playing with it.

Kieran and his wife Ivy have said that in spite of numerous calls and emails with Pets at Home’s customer service, the toy was still available to buy days after they made their complaints.

The couple has also shared screenshots of customer reviews calling the toy a ‘choking hazard’ dating back as far as 2018.

Pets at Home has now removed the product from its shelves while it continues to investigate the incident.

‘My son, bought the chew for his dog earlier that day with his pocket money,’ wrote Kieran in a social media post about the tragic incident.

‘He even asked the sales representative if it was safe. He watched and cried as I tried saving Peppa. I have regrets I couldn’t save her and in the corner of my eye all I could see was my son in pieces.

‘I couldn’t hold him as I was trying to save Peppa. He asked his elf if he can wake up from his bad dream.’

In his social media post, Kieran goes on to say that he has not had adequate help from customer service at Pets at Home. He says that he has contacted trading standards and will be starting legal action.

‘We are extremely sad to hear of the death of Peppa and our thoughts are with the family,’ a Pets at Home spokesperson told Metro.co.uk.

‘This product is a worldwide brand which is sold by many retailers both on the high street and online.

‘We are, as a matter of urgency, investigating the product in conjunction with the product’s manufacturer, and will remove the product from sale until our investigations have concluded.’

The family got Peppa, their first dog, during lockdown, as Kieran hoped to cheer up Noah and Oliver.

But he says that Noah now feels responsible for Peppa’s death because he was the one who picked out the toy.

Kieran says the six-year-old offered to give all his Christmas presents back if it would bring back the puppy.

The family are now waiting to get Peppa’s ashes so they can spread them by the seaside.


MORE : The negative impact working from home has on your body – and how to reverse it


MORE : Why accepting being average is the key to happiness


MORE : How to start writing in 2021 – tips from those who do it themselves

READ  Temperate insects as vulnerable to climate change as tropical species
Share on FacebookShare on TwitterShare on PinterestShare on Reddit
newsgrooveJanuary 7, 2021