Facebook is expanding its payment feature to let users transfer money and buy goods across its constellation of apps.

Facebook Pay, as the company is calling it, will allow users to upload their payment information on Facebook and then use that info interchangeably across its apps to transfer money to another user, make purchases, and contribute to fundraisers.

While Facebook has had a payment feature since 2007, the company says its new feature will merge capabilities across apps to make transfers and payments easier while inside the Facebook ecosystem. 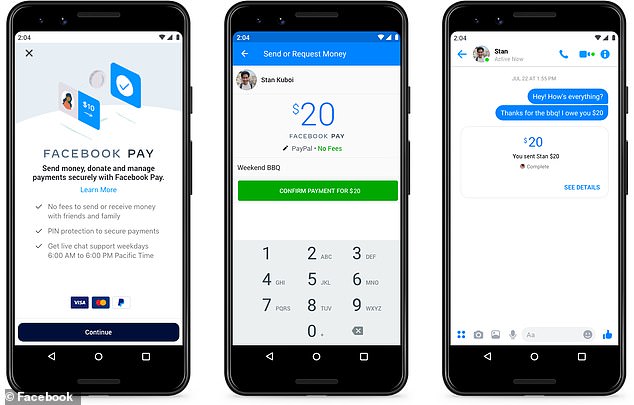 For now, Facebook Pay, is being rolled out on the its primary platform and Messenger app, but will eventually make its way to Instagram and WhatsApp.

In the meantime,  users in the US will be able to use Facebook pay this week to pay for fundraisers, in-game purchases, event tickets, person-to-person payments on Messenger and purchases from some Pages and businesses on Facebook Marketplace.

READ  Why even a cousin with Alzheimer's raises your risk

The company notes that it won’t collect users’ biometric information in the process.

Payments will be facilitated by mobile payment companies like PayPal and Stripe and will be compatible with most major credit and debit cards.

Despite Facebook’s expansion of its payment and transfer feature, it has struggled to advance other more ambitious efforts to kickstart its own digital currency, Libra.

EBay, Stripe, and Mastercard all announced their intention to leave which marks the second major rebuke of Libra after Paypal exited the group in the same month.