Facebook wants to help you get healthier through a new feature to track heart, cancer and flu risks

Facebook wants to make you healthier: A feature that helps you track your blood pressure, flu risks and cancer screenings is the social media giant’s latest move into digital health

Facebook launched a new tool on Monday that it claims will help you get healthier by tracking your heart, cancer and flu risks.

The feature, called Preventive Health, will make recommendations for you based on  your age and sex such as when to get a cholesterol test or where to get a flu shot.

The tool is only currently available in the US and can be accessed either by searching for it on Facebook or clicking on an ad.

‘The goal here is simply to save lives.’ 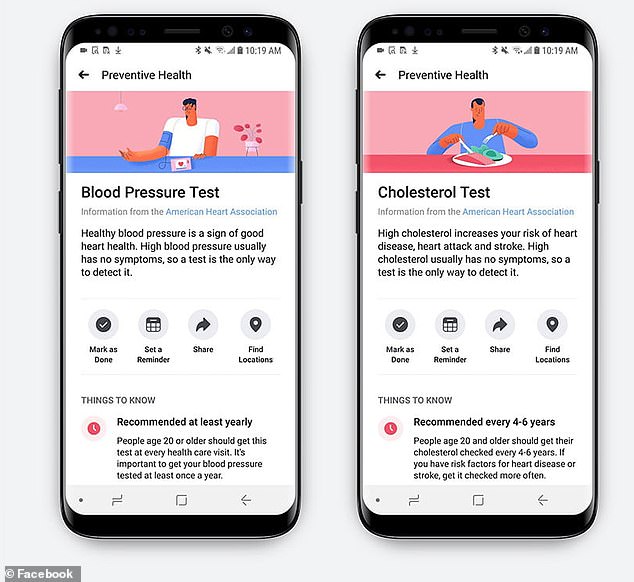 Facebook launched the feature, called Preventive Health, on Monday in which users enter their age and sex and get recommendations for tests and screenings

The company says its partnership with these agencies helped ensure that clinical recommendations were accurate and easily translatable to users.

Once users access the feature, they will be asked to enter their weight and age.

This will take them to a list of preventive care suggestions, such as cholesterol tests, blood pressure tests, colorectal cancer screenings, and – for women – mammograms and pap tests.

Users can then set up reminders for tests and check-ups or record when they’ve gotten one.

For flu shots, Preventive Health will load area maps of community clinics or pharmacies where users can immunized.

Dr Abnousi told CNN that he often thinks about his father, who died of blood pressure issues, when he thinks about the new tool.

Ideally, the Preventive Health feature would have helped Dr Abnousi’s father by reminding him to get blood pressure screenings.

‘My hope is that if this was around then, he would pull it up on his phone and though he’s too proud to talk to me about…he would be able to understand it on his own and realize that it’s important enough for him to engage in it,’ Dr Abnousi told CNN. 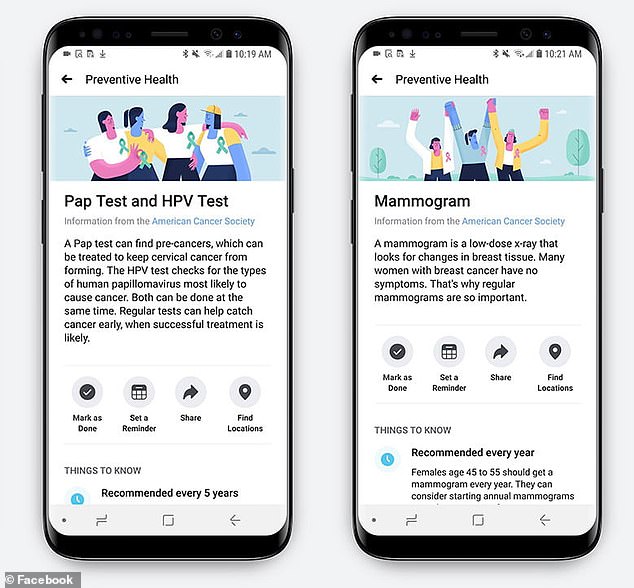 The company said it will not be sharing data with third parties nor allow advertisers to displayed targeted ads based on information entered into Preventive Health.

In a few weeks, Facebook will launch a Spanish-language version of the tool. The company says says it may bring Preventive Health in other countries and cover more healthcare topics if it sees users engaging with it.

‘We’re going to spend the next six to 12 months really trying to understand whether people are engaging with this tool and whether it’s helpful or not,’ Dr Abnousi told CNN.

‘Once we figure that out is when we’re going to start thinking about expansion.’

News of the tool comes just four months after Facebook rolled out a new feature in the US that tell users where to donate blood near them or if a blood donation is in need.

The social media platform has also promoted organ donations by asking users to share if they are registered donors.

Facebook is far from the only tech giant to foray into the healthcare marketplace with Apple’s smartwatches helping monitor heartbeats and cardiovascular irregularities and Amazon buying buying online pharmacy PillPack.