Formula 1 heads to Silverstone next for the British Grand Prix on 14 July after back-to-back races in France and Austria.

Despite missing out on his seventh win of the season Mercedes ace Lewis Hamilton still leads the F1 drivers’ championship by 31 points from team-mate Valtteri Bottas.

Verstappen has climbed to third in the championship after his victory at the Red Bull Ring in Spielberg. Ferrari’s Sebastian Vettel and Charles Leclerc are fourth and fifth respectively.

In the constructors’ championship Mercedes are top with 363 points while second-placed Ferrari have 228 and Red Bull have 169 in third.

The 2019 British GP could be the last hosted at Silverstone unless a new deal is signed between circuit owners the British Racing Drivers’ Club and Liberty Media.

This year’s race takes place at 2.10pm on Sunday 14 July and is live on both Sky Sports F1 and Channel 4.

Standings after nine races of the 2019 season:

Standings after nine races of the 2019 season:

The 2019 F1 season has 21 grands prix on the schedule. All races take place on a Sunday and the start times below are all UK.

F1 TV coverage in the UK

Channel 4 will show the British Grand Prix live on 14 July and will broadcast highlights of the other 20 races.

Formula 1 fans can also watch the action live on Now TV. Viewers can subscribe to a Sky Sports F1 season ticket via Now TV for all 21 race weekends. A one-off payment costs £195 – the equivalent of £5 per week. 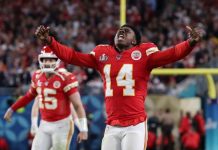 Triathlon – World body extends suspension of all events to June 30