Cats and dogs are happy but confused to have their humans home in the middle of the work day, say experts.

Laurie Santos of Yale University’s Canine Cognition Center says pets might be confused by how different their human’s energy and stress levels are when they’re focusing on a work project instead of watching television or making dinner.

‘I think a more stressful thing for dogs is watching their guardians feel so much stress and anxiety,’ Santos said in an interview for a Vice report. 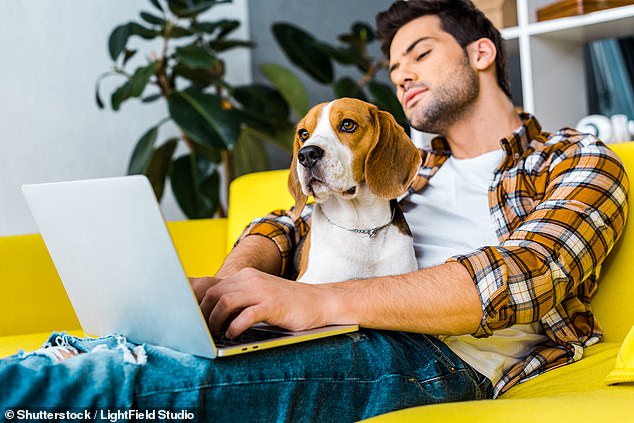 Pets can be confused by the stressful energy their human companions bring into the home when they’re telecommuting, something that can be reduced for dog and human alike with regular play sessions or walks

‘There’s evidence that dogs are attuned to our emotions, so I think dogs will pick up on the fact that we’re feeling very anxious and scared these days.’

To avoid becoming too stressed, Santos says simply spending a few minutes playing with a dog every few hours can be beneficial for both owner and animal.

‘Just petting a dog can reduce our stress hormones, and being around dogs can improve our negative moods,’ Santos said.

‘So, I think they’re really able to convey lots of benefits to us in this stressful time.’

Of course, regular walks can also be a major stress reliever and offer both dog and human a chance to focus on something else for a while.

The issue might be more complicated for cats, according to Kristyn Vitale, a researcher at Oregon State University’s Human-Animal Interaction Lab.

‘I think the importance of social interaction in the lives of cats has been underestimated,’ Vitale told Vice.

Vitale’s past research has shown that cats actually value human contact even more highly than food, but this might translate into some intrusive behavior, like walking across a laptop keyboard during a video conference. 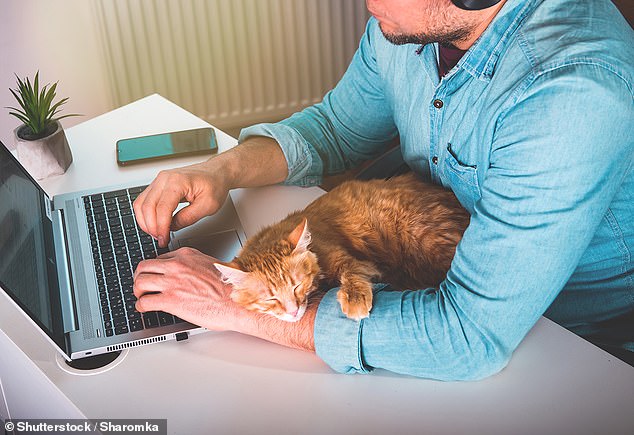 Many cats love human contact just as much as dogs, but they can be even more intrusive. Experts recommend creating separate cat towers or spaces just for your pets so they have somewhere to keep occupied when their owners can’t give them attention

To avoid these kinds of situations, Vitale recommends ‘giving your cat a special spot in your home office, like a cat tower, where they can watch you work from a distance.’

‘You can also try added enrichment to keep them active. I am sure all of us have extra toilet paper rolls laying around right now.’

‘Make your cat a food task by cutting some holes in the toilet paper roll, folding one edge down, filling it with treats, then folding the other edge down so your cat must move the roll around to get food.’

Some workers have embraced making their pets a part of their work routine.

The account was started by Mark Polchleb as a way to celebrate the strange and joyful experiences of sharing a workspace with a pet during such a difficult time.

‘I just took advantage of the fact that my dogs are at my feet. I thought ‘we all need a bit of happiness in our lives right now,’ Polchleb said in a recent interview.