Obese mothers can protect themselves and their babies from adverse health effects by taking up exercise during pregnancy, researchers claim.

Running on a treadmill for up to 20 minutes a day before and during pregnancy improved the health of internal organs in mice.

Exercise made the expectant mice better at managing their blood sugar levels by restoring how their key tissues worked.

This could slash the chances of the mother and baby developing metabolic diseases, such as type 2 diabetes.

Scientists at the University of Cambridge said the findings are important amid the current obesity epidemic worldwide.

Maternal obesity can have a major impact on both the mother and baby, during pregnancy and for years after.

Health officials advise keeping active as much as possible during pregnancy – but do not recommend going on a weight loss diet. 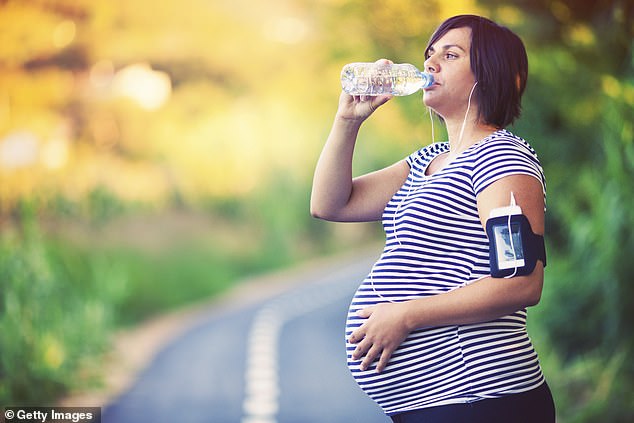 Obese mothers can protect their babies from adverse health effects by taking up exercise during pregnancy, researchers claim

Dr Amanda Sferruzzi-Perri, who co-led the study, said: ‘A moderate level of exercise immediately before and then during pregnancy leads to important changes in different tissues of the obese mother, effectively making the tissues more like those seen in non-obese mothers.

‘We believe these changes may explain how exercise improves the metabolism of the obese mother during pregnancy and, in turn, may prevent her babies from developing early signs of type 2 diabetes after birth.’

In the UK, more than a half of all women of reproductive age and almost a third of pregnant women are overweight or obese.

The short-term complications of maternal obesity are well recognised – including gestational diabetes that develops in the mother during pregnancy.

It also raises the risk of the dangerous complication pre-eclampsia, having larger infants and needing a C-section.

Obesity predisposes both the mother and her infant to develop metabolic diseases such as type 2 diabetes later in life.

Exercise is known to reduce the risk of type 2 diabetes in women who are not pregnant by improving how the body manages blood sugar levels.

However, until this study, little was known about how exercise can change the body’s tissues in an obese pregnant woman.

Researchers at the University of Cambridge, led by Dr Barbara Musical, fed five mice a sugary, high fat diet until they were obese.

Mice are a useful model for studying human disease as they have a number of characteristics in common, including the effects of obesity and the female body during pregnancy.

The mice ran on a treadmill for 20 minutes a day for at least a week before their pregnancy, the team wrote in the journal Physiological Reports.

They said they chose to commence the exercise regime prior to pregnancy as this would reflect the scores of obese women who try to lose weight before conceiving.

During pregnancy, the mice ran for 12.5 minutes for five days of the week. They stopped on day 17, three days before giving birth.

The researchers found exercise affected the ways that molecules and cells within tissue communicate.

In particular, how the cells responded to insulin and stored and broke down fats from food.

White adipose tissue, a type of fat which is under the skin and surrounding organs, showed the most significant changes.

The researchers compared the fat to those of expectant mice of a normal weight, and found it was restored to a similar healthy state.

Co study-lead Professor Susan Ozanne said: ‘Our findings reinforce the importance of having an active lifestyle and eating a healthy balanced diet when planning pregnancy and throughout for both the mother and her developing child.

HOW CAN YOU KEEP FIT DURING PREGNANCY?

The more active and fit you are during pregnancy, the easier it will be for you to adapt to your changing shape and weight gain. It will also help you to cope with labour and get back into shape after the birth.

Keep up your normal daily physical activity or exercise (sport, running, yoga, dancing, or even walking to the shops and back) for as long as you feel comfortable.

Exercise is not dangerous for your baby – there is some evidence that active women are less likely to experience problems in later pregnancy and labour.

READ  Dolly Parton health: 9 to 5 singer's health condition that led her to get her tattoos

Exercises to avoid in pregnancy:

When will gyms open again in the UK?

Coronavirus: Care home staff and residents to get regular tests

UK coronavirus LIVE: Quarantine to be axed for more than 50 countries with Government to reveal full list ahead of Super Saturday