ANT McPartlin and Declan Donelly have shared the first glimpse of Ant’s return to Saturday Night Takeaway after his rehab stint.

The popular programme was taken off air for one week in March last year when Ant was involved in a car accident – forcing Dec to present the rest of the series on his own.

It was then axed for 2019 while Ant focused on his sobriety, stepping away from several of his TV commitments.

However, the Geordie duo have now confirmed that preparation is underway for the 2020 series as they shared a sneak peek at the show’s first meeting to their joint Instagram page.

In the snap, Ant and Dec are sat next to one another in a board room, with the rest of the Takeaway team surrounding the table.

Everybody is looking intently at a screen, which the stars have cheekily covered with an emoji to avoid giving away any spoilers for the upcoming show.

A laptop screen and notebook have also been covered up with emojis, with the presenters taking no risks when it comes to top secret information being accidentally released.

The second image in the Instagram post encouraged fans to get involved with the show, advertising for participants as they asked: “Do you want to nominate yourself, a friend or family member to be part of the biggest show on telly?

“Do you know someone that would love a surprise on live TV?

“Applications for the 2020 series are now open!”

“If you want to be part of it details. Come on, you know you want to!”

Ant took 10 months off work after he was fined £86,000 and given a 20 month driving ban following the drink-drive crash in Richmond.

While Saturday Night Takeaway was axed, Dec presented the Britain’s Got Talent live shows solo, and Holly Willoughby stood in for Ant for last year’s series of I’m A Celebrity… Get Me Out Of Here!.

Ant returned to our screens earlier this year for the 2019 series of Britain’s Got Talent, and was given a standing ovation when he stepped onto the stage.

He also filmed Britain’s Got Talent: The Champions, and is due to return to the Aussie jungle for I’m A Celeb in November. 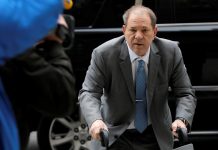 BRITs 2020: Maya Jama is the picture of elegance in  sweeping black evening gown