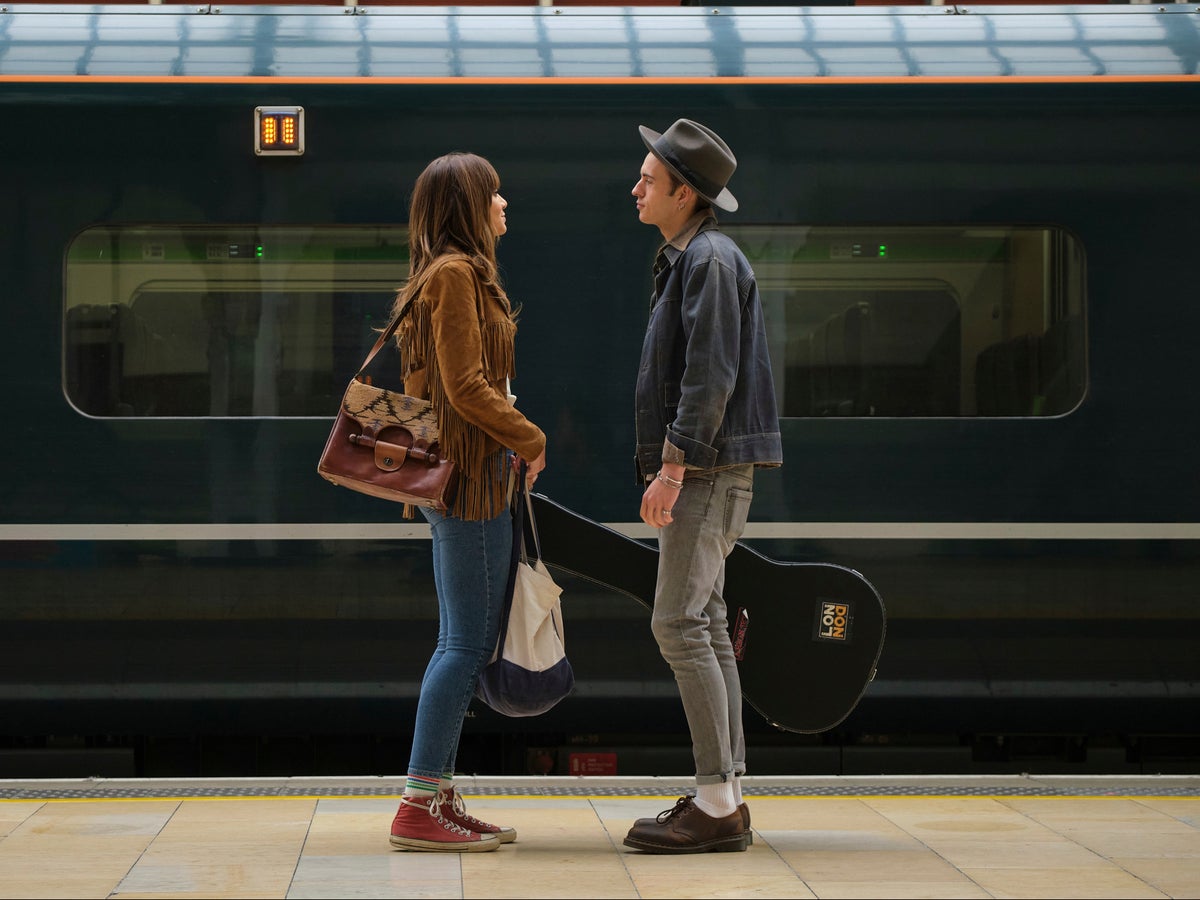 This article contains spoilers for Everything I Know About Love

You know it’s bad the second he starts quoting Philip Larkin. We’re on a train. Maggie (played by Emma Appleton) and Street (Connor Finch) have just met and are flirting over tinnies on a table seat. After discovering that he is 27, she asks him to describe his mid-twenties, to which he inexplicably responds with a verse from Larkin’s “On Being Twenty-six”, eyes so earnest it’s almost unbearable to watch. Maggie, however, falls hook line and sinker, all doe-eyed and “sp**k drunk”, as one character will later call it.

In case you haven’t already binged the entire series, this is a scene from Everything I Know About Love, the brilliant BBC One adaptation of Dolly Alderton’s hit 2018 memoir of the same name. Like the book that has inspired it, the series revolves around the life of a group of spirited twenty-somethings in London. The year is 2012 and Maggie, an avatar for Alderton, is 24 and has just moved into a Camden flatshare with her three best mates.

With its frequent childhood flashbacks and touching moments of young women supporting one another, the series is the same paean to female friendship as Alderton’s memoir. But it’s not the only thing in the show worth talking about, which brings us back to Street – yes, that really is his name. There’s a guitar he may or may not know how to play. There’s a Nokia 3310 instead of an iPhone because “our brains are changing shape because of how much time we spend online”. And of course, there’s also a hat. You see, Street is a Softboi.

Much has been said about Softbois in recent years but to the uninitiated – or those lucky enough to have escaped their wily clutches – here’s a breakdown. Put simply, a Softboi is a straight man who prides himself on having alternative interests. He recites poetry off the cuff, listens to niche bands you won’t have heard of, and regularly reminds you that he is a feminist. All of which gives him a superiority complex that ensures he is always in the position of power, while you remain trapped in perpetual pursuit of his approval.

That’s the thing about Softbois: they purport to be the “nice guys” when in reality, they’re the worst ones. Narcissistic, emotionally manipulative, and downright destructive, Softbois have put a plague on the heterosexual dating scene.

For Street, we see this manifest in various ways. It starts when he tells Maggie not to “worry about coming” to the flat party he’d already invited her to. Soon, he’s scoffing at her for learning a dance routine with her friends. Then, he’s giving her a mixtape so she “can listen to some actual music”. Things take a darker turn when he starts to dismantle her character, teasing her for being a “dumb b****” who is “so fit” it drives him “mental”.

This is a very Softboi-specific type of flirting. Coined by pickup artists as “negging”, the word itself is derived from “negative feedback” and is a psychologically recognised form of emotional manipulation. The idea is that by giving someone a backhanded compliment, you elicit a desire within them for your approval. This works a treat on Maggie, who, after initially getting up to go home, is almost instantly seduced into getting back into bed with Street the second he tells her: “I fancy you in spite of your personality”.

However, moments later the dynamic shifts again when one evening in bed, Street calls Maggie “simple” and refers to their relationship as “just fun”. Then, in a dismal attempt to revisit his earlier joke, he calls her a “dumb b**** who asks for nothing”. Unimpressed and realising she deserves better, Maggie pulls away and calls Street out for never taking an interest in her life.

But just when you think she’s about to call it quits, a brief pontification from him on why “albums are like humans” has her back in his arms and professing her love for him. Street responds in typical Softboi fashion: he laughs at her.

The relationship is a shrewd examination of why the Softboi archetype is so damaging and yet, simultaneously, so difficult to escape. Street’s manipulation is instantly recognisable to the viewer, but to Maggie it goes unnoticed, as it often does for women in similar relationships.

The best thing about Alderton’s depiction of all this, though, is that she doesn’t waste time examining the reasons for Street’s problematic behaviour; this show is not about him. It’s about Maggie, and so the focus is instead on examining how her own insecurities have drawn her to a man like that for what is, in all likelihood, not the first time.

That’s not to say she’s at fault for falling for his Softboi shtick, she isn’t. But it’s this degree of nuance that is crucial and often lacking when it comes to on-screen portrayals of toxic relationships. Because not only could it help someone identify their own negative relationship patterns, it might just be the thing they need to break free from them.

‘Everything I Know About Love’ can be streamed on BBC iPlayer now, and screens at 10.40pm on 7 June on BBC One