Follow live updates from tonight’s Premier League action as Everton host Crystal Palace and Burnley take on Aston Villa on what is a huge night in the relegation fight. Everton can secure their Premier League status with a victory at Goodison Park, as it would take them four points clear of Leeds United with just one game remaining, but anything less would leave Frank Lampard’s side in grave danger with a trip to Arsenal to come on the final day of the season on Sunday.

Brentford’s 3-2 win at Goodison last weekend showed how unpredictable the survival fight can be, and Leeds and Burnley will for Patrick Vieira’s side can play their part. It is Burnley who occupy the final spot in the relegation zone, with Mike Jackson’s team sitting one point below Leeds, but if they were to avoid defeat at Villa Park their survival hopes would be back in their own hands. It would mean a victory against Newcastle at Turf Moor on the final day would be enough, regardless of how Leeds perform at Brentford.

It’s shaping up to be a thrilling last few days of the season at both ends of the table but tonight the focus is all about survival. Who can hold their nerve and boost their hopes ahead of the final day? Follow all the latest from Everton vs Crystal Palace below, plus goal updates from Aston Villa vs Burnley and Chelsea vs Leicester:

59 mins: Mykolenko’s delivery from the free-kick is cleared away routinely by Palace’s first man. Everton have it straight back though.

Alli slides Gordon in down the right and his low cross is cleared away.

The tide has well and truly turned.

57 mins: Hughes gives away another free-kick midway inside the Palace half. The visitors are rattled now.

SUB! That is Will Hughes’ final contribution. He is replaced by Lucas Milivojevic.

Everton launch a high ball into the penalty area from a free-kick on the halfway line. Holgate nods it back down for Keane and he controls it before rifling a volley into the far corner.

What a finish from the centre-half!

54 mins: Alli has looked frustrated since coming on. He looks a yard or two off the pace – which is understandable given the lack of football he has had.

Schlupp knocks the ball down the line and is body checked by the former Tottenham man.

Everton do win it back after the free-kick but Doucoure then plays a square pass straight to a Palace shirt.

More groans from the Goodison faithful.

51 mins: There’s the warning from Palace though.

Zaha slides a lovely ball into the area for Schlupp. He pulls it back for Ayew and Holgate is across well to thump it behind for a corner. The subsequent corner is cleared at the front post, but Palace remain a real threat when they come forward.

And that’s wonderful play from Eze! He dribbles past one, two, three Everton players and goes down in the area but Anthony Taylor is unmoved.

He was so, so close to pulling the trigger there. Think he lost his footing more than anything. Would have been a worldie.

49 mins: Good start to the second half from Everton!

Iwobi plays an incisive pass into Gordon. He dummies it for Coleman who fizzes a low cross into the middle but it misses all the Everton attackers in the middle.

Definitely more urgency to the hosts’ play already. But can they make it count?

47 mins: You can tell Goodison Park has heard the news from Villa Park. The tension in the stadium has ramped up another notch since the half-time whistle.

Everton start the second period on the front foot as they probe for a way back into this game.

46 mins: SUB! Back underway at Goodison Park and we have a change in personnel. Dele Alli has come on for Andre Gomes.

Everton need a huge 45 minutes if they are going to turn this one around.

How do Everton respond to that then? The supporters will know that Burnley have gone in front.

Second half at Goodison Park is getting underway very shortly.

Ashley Barnes has give Burnley the lead from the penalty spot.

They are moving above Everton as it stands. 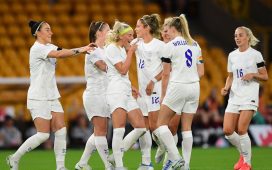