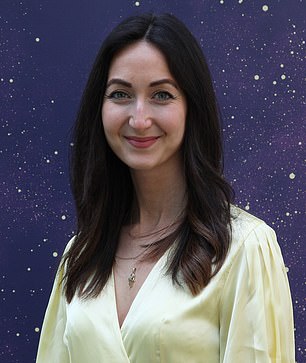 The first time I encountered hospital food was 15 years ago on a cancer ward in North London. I was 12 and my dad Jeff, aged 49, was dying. Having suffered on and off for seven years, tumours now ravaged every inch of his body.

He was reliant on successive inpatient admissions for treatment to get him from one week to the next.

By this point, his once-healthy appetite – he had a particular devotion to fruit and nut chocolate and custard tarts – had dwindled.

It wasn’t the fault of the hospital food, though – however gross and puce-coloured. It was the toxic drugs sloshing around in his stomach that left him permanently nauseous.

Luckily, a few weeks before the end, he was transferred to a hospice with a mightily well-stocked tuck shop.

Like many middle-class children, my access to sweet treats was limited to birthdays, seasonal holidays and the odd weekend if I was lucky. But a scarce advantage of having a terminally ill parent is that, temporarily, such rules no longer apply.

And while Dad’s ever-disappearing body couldn’t manage entire meals, it could however enjoy Jelly Tots and Fruit Pastilles.

A week before he died, I sat by his bedside as he guided me through my maths homework.

Come 7pm, and having managed an eighth of his supper, he handed me £3 and hurried me along to pick up some sweets. 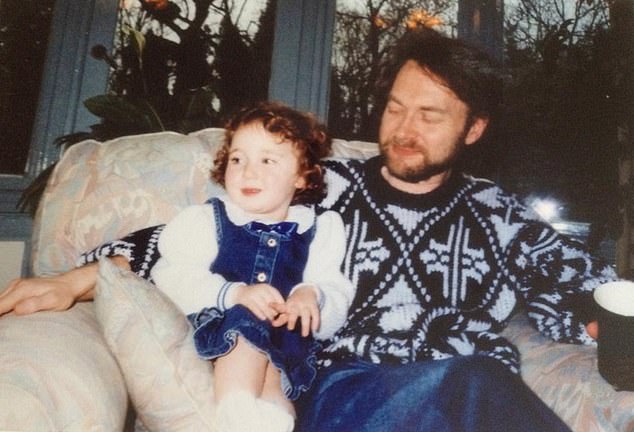 Precious moment: Eve, aged two, with her father Jeff before his long battle with cancer began

I carefully selected his favourites – Haribo Starmix, sugar-coated fruit gems and, of course, Jelly Tots – and returned to his bedside where we watched reruns of A Place In The Sun and rejoiced over the generous proportion of Haribo’s gummy fried eggs (the best, in our opinion).

READ  University student died after hospital ‘assumed he was drunk’

It was one of the last evenings I would spend with my father, and by far the most precious.

I thought of this recently, as I read that some health experts are up in arms about vending machines in hospitals selling fizzy drinks and chocolate.

You’d think with the ongoing scandal of fatal listeria poisoning linked to sandwiches sold in NHS hospitals, there would be other things to worry about. But Professor Dame Theresa Marteau, a scientist from the University of Cambridge, has called for radical restrictions on vending machine ‘junk’ on wards.

Why go with Gwyn’s flow if water’s on tap? 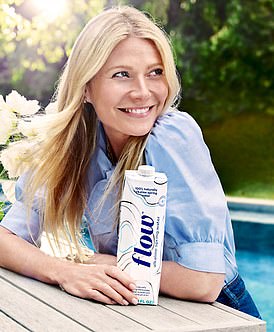 Gwyneth Paltrow, above, arrived in London last week to open her Goop shop at Harvey Nichols in Knightsbridge.

Among her products are Moon Dust (whatever that is), jade eggs (inserted in unmentionable places) – and Flow Alkaline Spring Water (£13 for six one-litre cartons).

Billed as a water with ‘alkalising properties’, it is said to ‘help restore our bodies’ natural acidity level’.

But science says the key to hydration is simply drinking tap water when you are thirsty.

The ‘alkalising’ effect is biologically implausible, as the brain keeps the body’s pH at a stable, neutral level, no matter what we eat or drink.

If your internal pH level veered a fraction, you’d be dead! So save yourself a fortune, and stick to tap.

This followed a report that revealed patients, visitors (and doctors and nurses, mind you) overwhelmingly shun nutritious snacks such as apples, grapes and black tea, in favour of crisps, sweets, cakes, pastries and muffins.

‘Considering the high rates of obesity in children and adults, it is hard to justify a hospital selling a slice of cake at 641 calories,’ said Prof Marteau.

Well, I understand how someone might reach this conclusion. The problem is, you’d expect there to be some scientific basis to such advice. But there really isn’t.

The majority of patients spend only a short amount of time in hospital – the average is about four days. A third of admissions are completed within 24 hours.

As Catherine Collins, a dietician who works with critically ill patients at a London hospital, explains: ‘Obesity is related to people’s lifestyle and diet throughout their lives, not for the few days they might spend in hospital.’

Similarly, there will be minimal damage done to your waistline by sharing a bag of Minstrels with Mum while she’s recovering from that hip op.

Then there’s the added complications of what happens during a stay in hospital. Nearly 60 per cent of all admissions involve some kind of surgical procedure.

A general anaesthetic is well known to suppress appetite. And of the ten million operations performed every year, a fifth impact the digestive or respiratory tract. These involve procedures which, according to Collins, who has spent 20 years feeding post-op patients, make eating near-impossible. Cancer patients who have bowel, stomach or colon tumours removed, for instance, often require a stoma bag to temporarily replace the digestive system, something that brings a high risk of rapid weight loss.

The healthiest choice for these patients? Crisps and full-sugar coke. Collins explains: ‘Stoma bags make it hard to absorb water, leading to severe dehydration. The combination of sugar and salt helps the reuptake of water, keeping the body hydrated.

‘Crisps are easy for patients to eat if they are lying sideways and struggling to sit up.’

The real tragedy? In February, it was revealed that three patients a day die from starvation or thirst on NHS wards – and 80,000 hospital meals are left untouched each day.

The reasons for this are complex, and span far beyond the quality of the food.

Studies show that specific dietary requirements, the time that a meal is served, lack of assistance from staff and even the background noise can all put patients off their (already unappetising) dinner.

Collins says: ‘The task of most hospital dieticians is to get enough calories into people to build their strength up so they can go home. If patients manage a chocolate bar, it’s far better than nothing.’

And if there’s ever a time when we should let people take comfort in whichever way they please, it’s during an – often worrying – hospital admission.

Clearly, this isn’t the best time to start to slap wrists or ‘educate’ people about a healthy diet.

And, remember, a few Jelly Tots never killed anyone. Trust me.

England’s coronavirus outbreak is shrinking as cases have HALVED with 1,700 people infected each day

Dementia symptoms: An early sign of vascular dementia to watch out for

Trump's campaign rally in Tulsa may have contributed to coronavirus spike