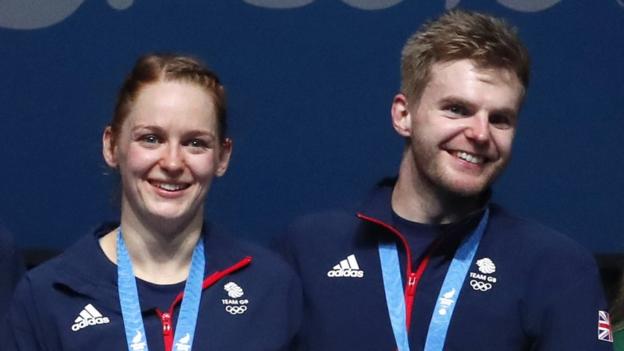 Marcus Ellis and Lauren Smith caused a shock at the European Games by beating British rivals Chris and Gabby Adcock in the badminton mixed doubles final.

Ellis – who won men’s doubles gold with Chris Langridge on Saturday – was also chosen to be the GB team’s flag bearer at the closing ceremony on Sunday.

“She’s a world-class fighter and an Olympic silver medallist and I knew I had nothing to lose and just to let it flow,” said Price.

Kirsty Gilmour had to settle for silver as she lost the badminton women’s singles final 21-16 21-17 to Denmark’s Mia Blichfeldt.

There were also two silvers for Britain in the artistic gymnastics in Minsk, Belarus – Giarnni Regini-Moran was second in the men’s floor, while Becky Downie was runner-up in the women’s uneven bars.

Cyclists Jess Roberts and Megan Barker secured their second medal of the Games with a gold in the madison after winning silver in the team pursuit on Friday.

The seven medals won on the final day of competition in Minsk saw Britain place ninth in the table with 23. Russia topped the table on 109 medals – 40 ahead of Belarus in second.