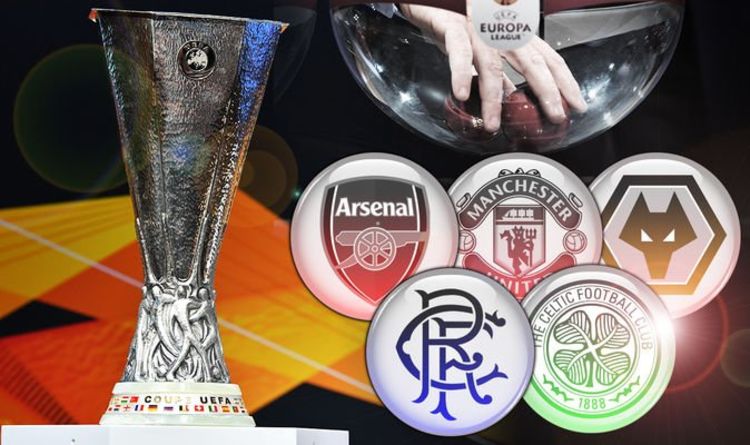 12:31: Now it’s starting to take shape. Celtic fans certainly gritting their teeth with that one…

12:25: And we’re straight into it here with the top teams being drawn. This of course means right now but Man Utd and Arsenal fans now know which group to keep an eye out for.

12:10: Rangers have been told they will have to partially close part of the Ibrox for their next home Europa League match.

The punishment comes for ‘racist behaviour’ with ‘sectarian chants’ highlighted as the reason.

All eyes now on who that will be against…

Europa League player of the season

12:05: Eden Hazard has been named the Europa League player of the season!

Very short clip of him thanking everyone for the trophy…

11:55: Man Utd are currently the favourites to lift the trophy in Gdansk at the end of the season with Arsenal a close second.

Surprisingly (or possibly not) Wolves are fifth favourite just behind Sevilla and Roma and ahead of teams such as Lazio, Porto and PSV.

11:45: Arsenal have some unfinished business in this competition after being handed a beating by Chelsea in the final last year.

The 2020 final takes place in relatively new Stadion Energa Gdańsk in Poland which was purposefully built for the Euro 2012 championships.

11:30: It’s easy to forget that Wolves were playing League One football just six seasons ago.

They were a mid-table Championship team before Nuno Espirito Santo took charge ahead of the 2017/18 season when they cruised to the top of the league.

And they took the Premier League by storm in their first year in the top flight since 2012, finishing seventh.

There won’t be many teams in Europe that fancy going to the Molineux to face this current team.

11:15: As with the Champions League draw, no one team can play a club from their own country.

That means no Old Firm derby in the group stages unfortunately but we could still see one of the Premier League sides meet either Rangers or Celtic.

Both Arsenal and Man Utd are in Pot 1 while Celtic and Rangers are in Pot 2 and 4 respectively. Wolves could also face the either Scottish side being in Pot 3.

11:00: Hello everyone and welcome to our LIVE coverage of the Europa League draw.

The Champions League draw took place yesterday with a few tasty looking match-ups, but now for the football enthusiasts who travel around the far reaches of Europe to follow their team everywhere.

There are a healthy FIVE British teams in the draw with Wolves sailing through their qualifying section while Celtic also dropped down from the Champions League qualifying stage.

Stay tuned for the latest updates with the balls expected to be drawn just after 12pm (he says half-expecting them to be done at 4pm).