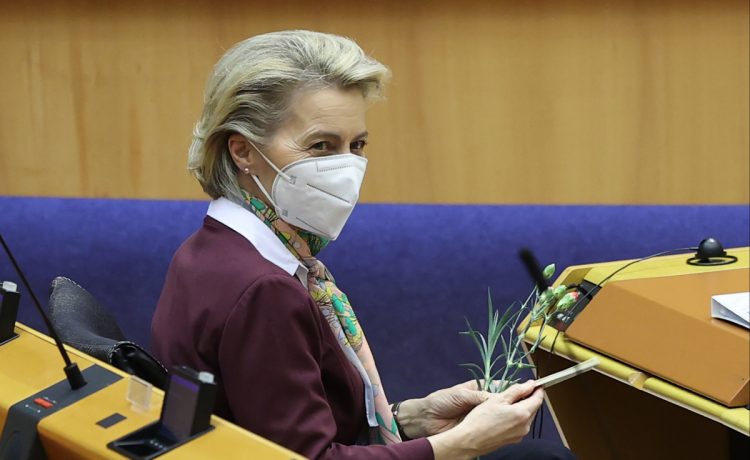 EUROCRATS will be vaccinated in exclusive centres away from the public this month – as Europe’s jabs drive continues to flounder.

The EU is setting up special facilities where Brussels’ army of 50,000 officials and diplomats can get the shot from March 22.

It comes despite the bloc coming under heavy fire over its snail-paced rollout which is trailing way behind Britain’s.

And it emerged yesterday Brussels’ plan for vaccine passports is now set to include people who have had the Russian and Chinese jabs.

The move could cast doubts on whether the documents would be accepted by countries like Britain for international travel.

All three main EU institutions – the Commission, Council, and Parliament – will have their own vaccination centres.

At first only vulnerable members of staff will be jabbed, such as over-65s and those with serious illnesses.

But many MEPs and eurocrats could be classified as “essential workers” in April, meaning they’d be fast-tracked for the shot.

A Commission spokesman insisted all EU staff will be treated “in line with” local vaccination rules and won’t get special treatment.

Officials have argued setting up dedicated centres for them will take pressure off facilities used for the wider public.

Belgium has been lagging way behind even other European states and has only managed to give a first dose to 5.4 per cent of people so far.

Across the entire EU some 41.5 million shots have been administered to 9% of the population.

In contrast, Britain has rolled out a whopping 23.5 million jabs to more more than one in three (35%) citizens.

And with the continent’s rollout floundering Eastern European countries are turning to Russian and Chinese vaccines to make up the shortfall.

Hungary’s PM Viktor Orban revealed he’d chosen to take Beijing’s vaccine because “our orders from the EU are a tragedy”.

The eurosceptic leader, who has a law degree, also slammed the bloc’s contacts with drugs giants for being too weak.

He fumed: “I don’t think that a legal intern making such contractual errors would be hired – or at least they’d be shown the door quite quickly.”

Yesterday the EU’s rollout suffered another setback as Johnson and Johnson warned it will struggle to fulfil early shipments to the bloc.

Brussels has been banking on the US pharma giant to come to the rescue after sparking a major row with Anglo-Swedish firm AZ.

The controversy came as Australia heaped pressure on Brussels to ditch its hated vaccine export ban.

It’s building a “coalition of countries” including Canada, Japan, Norway, and New Zealand to take on the EU.

Aussie trade minister Dan Tehan said: “The more we can put collective pressure on them, the more they will realise what they are doing is wrong.”

Chief eurocrat Charles Michel was also slapped down by No 10 last night for claiming Britain has imposed its own ban on vaccine exports.

Third Covid wave this year will ‘find those not vaccinated’, Whitty warns

Girl, 13, admits she MADE UP story that led to her teacher being beheaded

Don’t mix with other parents outside school gates, minister warns

The EU Council boss said: “I am shocked when I hear the accusations of vaccine nationalism against the EU.

“The UK and US have imposed an outright ban on the export of vaccines or vaccine components produced on their territory.

“But the EU has simply put in place a system for controlling the export of doses produced in the EU.”

But a UK Government spokeswoman hit back: “We have not put restrictions on exports of COVID-19 vaccines.”