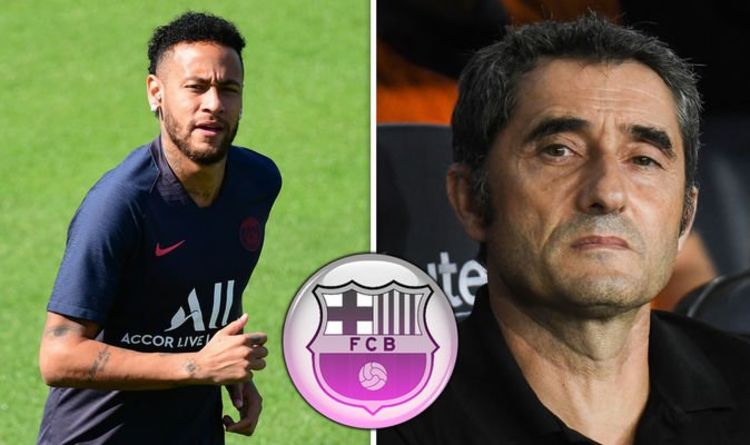 Barcelona manager Ernesto Valverde admits he is relishing the prospect of the transfer window finally coming to a close on Monday night.

While Premier League clubs have been unable to do business since August 8, the window for Spanish clubs – as well as for those from Germany and France – is still open.

But the window finally comes to a close at midnight on Monday.

Barcelona remain hotly tipped to do more business before then, with Neymar linked with a return to the Nou Camp two years after leaving to join Paris Saint-Germain in a world record £198million move.

The Brazilian has made it clear over the summer that he is keen to depart PSG after an underwhelming spell at the Parc des Princes.

Despite back-to-back league titles and an impressive goal return, Neymar has suffered from injuries and failed to help the club move closer to their goal of winning the Champions League.

And with a return to Spain on the cards, the 27-year-old has been linked to both Barcelona and Real Madrid, with the former thought to have had multiple bids rejected as they seek to find an agreement that would include both players and cash in return for Neymar.

Asked for a fresh update on Barca’s interest in the player, Valverde declared at a press conference to preview tomorrow’s trip to Osasuna: “We are very much looking forward to that day [the end of the transfer window] and resting.

“It’s getting tiresome. I have nothing to say about the Neymar subject. We’ll see what happens.”

But fresh reports from Catalan newspaper Mundo Deportivo indicate that a deal has actually collapsed.

They claim that a counter-offer from PSG to Barcelona has been rebuffed, with the Parisians having asked for £195m (€215m) as well as the services of Ousmane Dembele, Ivan Rakitic and Jean-Clair Todibo.

It remains to be seen whether the two clubs can agree on a package before the rapidly-increasing deadline.

But Barca centre-back Gerard Pique is keen to be reunited with his old team-mate, with whom he won two titles, three Copa del Reys and the Champions League in four seasons together.

“I hope he comes here with us to Barcelona but also Real Madrid is another big club.

“It is normal that they are interested in trying to sign him. I don’t know man. Let’s see what happens this week.

“Everything is speculation. Let’s see at the end if he arrives here or not.”

Pique also admitted that he has been in conversation with Neymar, adding: “We have spoken, yeah. But obviously it is a private conversation.

“I know that the club are working very hard to get him.

“It is not easy, he is not a player of Barcelona right now. Let’s see if he comes back.”