Charley Webb, 34, has shared her fury with her 562,000 Instagram followers this afternoon after her husband Matthew Wolfenden, 41, went behind her back and allowed their six-year-old son Bowie to get a pet. The Debbie Dingle actress, who met her other half on the set of Emmerdale, where he plays David Metcalfe, explained in a video that she had already said no to Bowie after he asked for a hamster.

However, Matthew defied her decision, and told the excited youngster they could go to the pet shop to get the tiny animal.

Speaking to her fans about the situation, Charley said: “So, Bowie is desperate for a hamster.

“Not only has he said yes to the hamster, he then said it’ll need a friend, so we’ll have to get two hamsters.”

The star glared at the camera as her children bickered, before sighing: “This is what our life sounds like.”

Clearly still in two minds about the hamster, Charley asked her followers whether or not the animal would “stink”.

“All I care about is if it stinks, that’s it,” before adding another poll to figure out whether or not the hamster would smell bad.

Eventually, Charley gave in to her husband and young son’s demands.

Sharing a photo of Bowie clutching on to a hamster box, she admitted: “It’s happened.”

Charley concluded by sharing a selfie while throwing up a peace sign.

She wrote: “The face of a hungover mother that’s just been roped into getting a hamster.

“I literally don’t like anything that moves fast so this is a big deal.”

Charley went on to share a clip of the adorable furry creature in his cage at their family home. 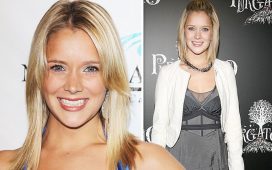