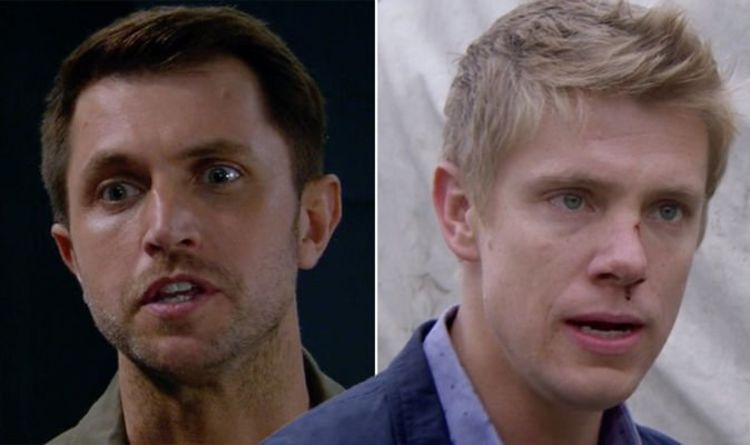 Emmerdale’s Lee Posner (played by Kris Mochrie) has haunted Victoria Sugden (Isabel Hodgins) on the ITV soap for months now. Lee raped Victoria back in April which led her falling pregnant with his baby. Now, following a violent confrontation with Victoria’s brother Robert Sugden (Ryan Hawley), Lee’s future hangs in balance. Here are all the clues and spoilers to suggest what exactly the Emmerdale character’s fate may be.

Does Lee Posner die in Emmerdale?

Lee’s death in Emmerdale would be welcomed by a number of the ITV soap’s main characters.

Victoria even foreshadowed his possible demise on Tuesday, July 30, telling him: “I hope you die, slowly and in pain…no offence.”

Emmerdale fans will have to continue tuning in this week to discover whether or not Lee really dies, but there’s plenty of evidence to suggest he will.

WILL ViCTORiA SUGDEN KEEP HER BABY ON EMMERDALE?

Robert’s attack has been preempted for weeks with many thinking it could pave way for Hawley’s exit.

The Emmerdale actor decided to leave the soap earlier this year although exact details of his exit were kept under wraps.

Should Lee’s death be confirmed, it’s likely one half of Robron would be spending many a year behind bars.

The attack was particularly brutal in fashion with Robert striking Lee over the head with a shovel, rendering him unconscious.

Robert and Lee briefly scuffled before Hawley’s character said: “You’re not walking away from this.”

“Babymaker, moneymaker, I wonder who the next lucky lady is going to be.”

Robert then hit him over the head with the shovel and Victoria arrived on the scene but struggled to find a pulse, seemingly confirming Lee wouldn’t regain consciousness.

WHY IS RYAN HAWLEY LEAVING EMMERDALE?

Soon after, paramedics arrived and loaded Lee into an ambulance.

Aaron questioned his husband: “Why couldn’t you just leave it alone? If he dies…”

Robert defended his actions, responding: “He was saying all these things about Vic,

“Saying that she liked what he did to her, that he was going to do it to someone else.”

Emmerdale’s Aaron then told his husband to act like Lee was the one to start the attack and Robert acted in self-defence before preparing themselves for him not waking up.

IS DEBBIE DINGLE PREGNANT ON EMMERDALE?