Emma Roberts was spotted showing off her growing baby bump during a stop at a Starbuck in Los Angeles’ Los Feliz neighborhood on Saturday.

The 29-year-old American Horror Story star was seen making a quick stop for a snack and drink before taking care of other errands.

The actress was put on a bright display in her floral mini dress which was covered in a gold ditsy print. 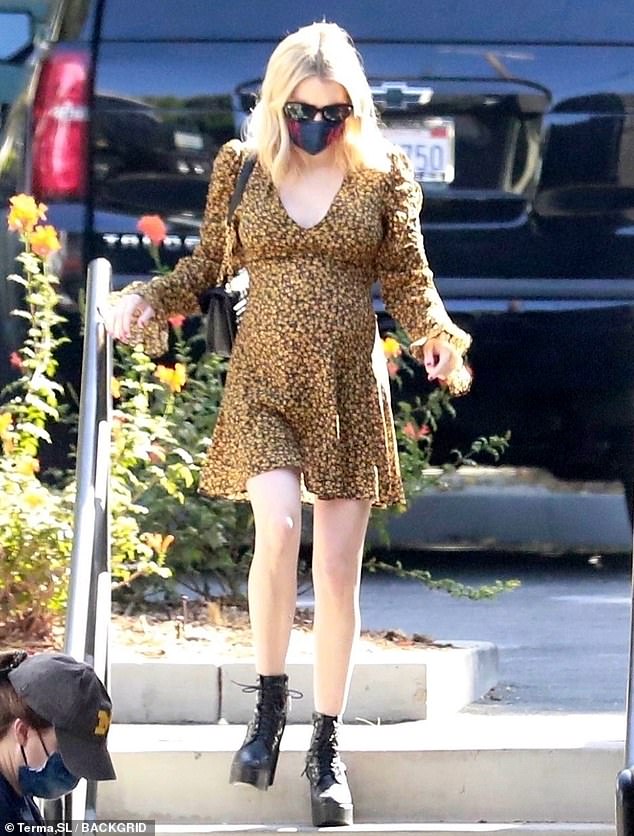 Filling up: Emma Roberts, 29, was spotted in her regular stomping grounds of LA’s Los Feliz neighborhood as she picked up a drink and a snack at Starbucks on Saturday morning

She highlighted her slender legs in the outfit and paired it with an edgy pair of black platform boots that elevated her 5ft2in stature.

Emma wore her shoulder-length blonde tresses parted down the middle, and she carried along a black handbag.

She did her part to slow the spread of the novel coronavirus by wearing a navy mask reading, ‘Oh hey,’ in crimson embroidery. 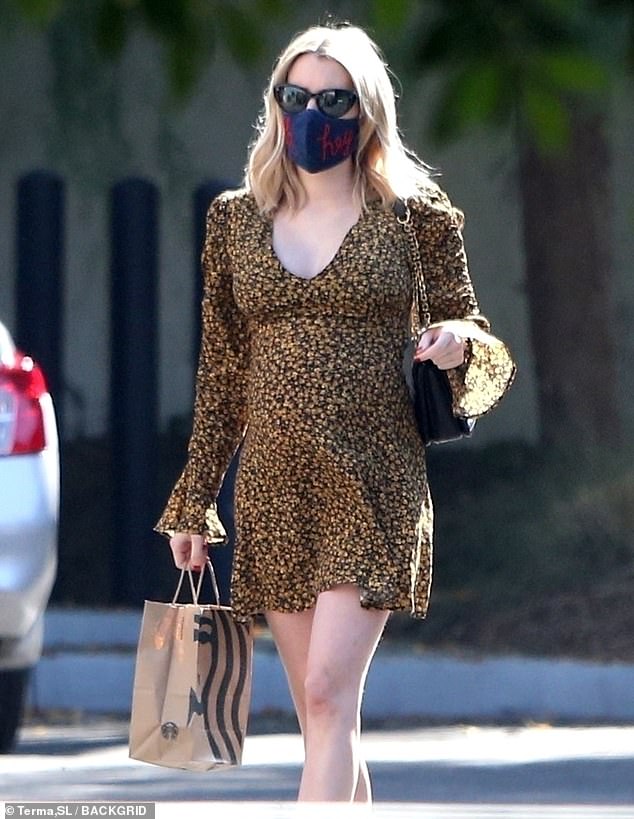 Eye-catching: Emma showed off her burgeoning baby bump in a lovely black and gold dress 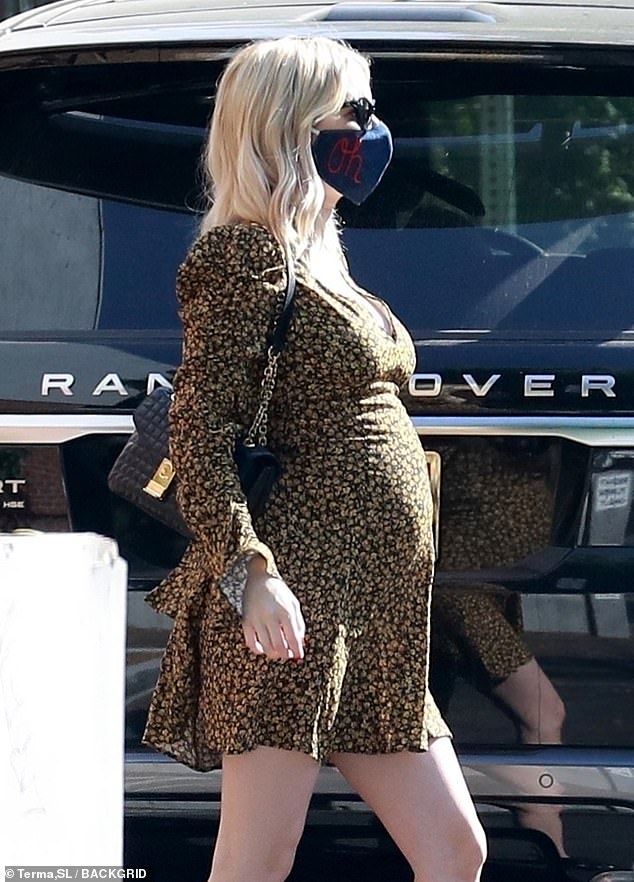 Chic: The American Horror Story regular paired it with an edgy set of black platform boots and a black handbag

Missing from Emma’s outing was her partner Garrett Hedlund, 36, with whom she announced her pregnancy on Instagram on August 30.

The Little Italy star shared a photo of herself in a white off-the-shoulder dress while sharing a laugh with her beau, who wrapped his arms around her.

She announced they were expecting a baby boy by captioning the post, ‘Me…and my two favorite guys.’

Emma waited to confirm the news of her pregnancy, but it actually broke on June 25, when her mother Kelly Cunningham confirmed it on Instagram.

After a fan asked if the Scream Queens star was expecting, she replied, ‘Yes,’ and added a heart emoji.

‘Thank you so much! Very excited,’ she replied to another fan congratulating her. 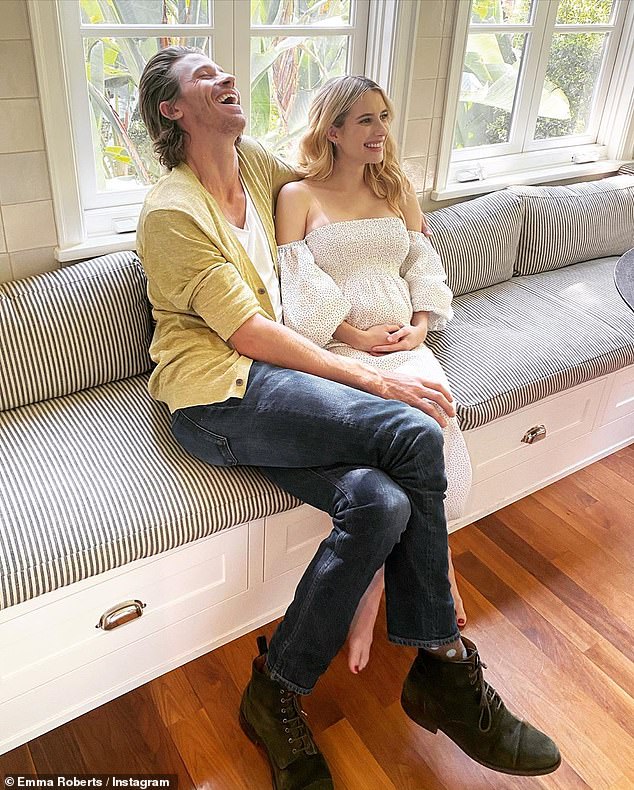 MIA: Missing from Emma’s outing was her partner Garrett Hedlund, 36, with whom she announced her pregnancy on Instagram on August 30

The niece of Julia Roberts was first linked to Garrett back in March 2019.

The two had been friends prior to dating, but a source described the relationship at the time as ‘casual’ and ‘just a couple of weeks old’ to Us Weekly.

Garrett, who was born and raised in rural Minnesota, is best known for starring in the Oscar-nominated Netflix film Mudbound, as well as the Netflix action–adventure film Triple Frontier, in which he starred with heavyweights including Ben Affleck, Oscar Isaac, Charlie Hunnam and Pedro Pascal.

Prior to her new romance, Emma was in a seven-year on–off relationship with her AHS costar Evan Peters, 33.

A source told Us Weekly at the time that it was an amicable breakup and that they were now ‘just friends.’ 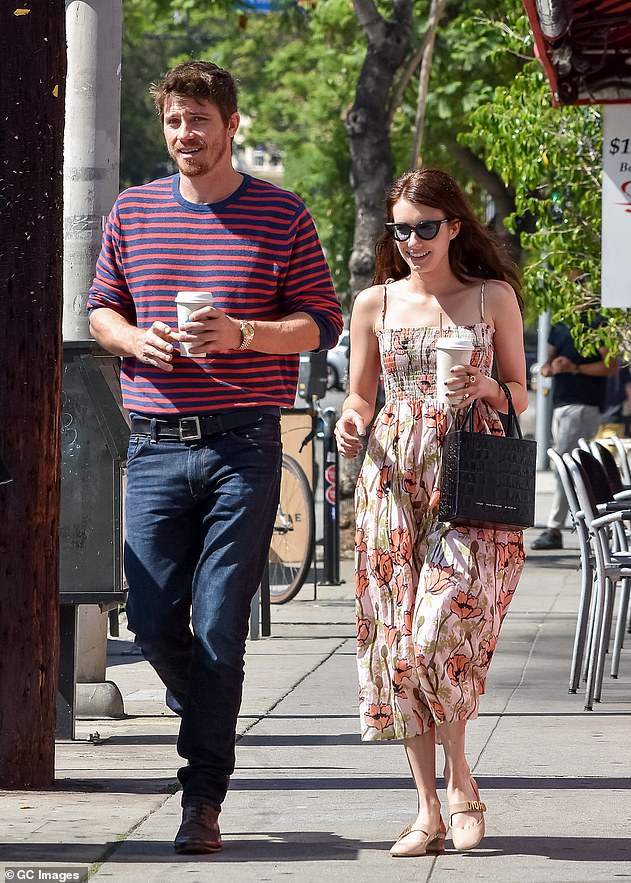 New love: Emma and Garrett were first linked in March 2019, following her breakup from AHS star Evan Peters, 33. She announced that the new couple were expecting a boy; shown June 2019

Earlier this month, Emma and her online book club Belletrist inked a first-look deal with Hulu to produce new TV projects, according to The Hollywood Reporter

Emma and her Belletrist co-founder Karah Preiss will be creating TV series adaptations of books, and Hulu will have the first pick at producing them.

The duo already have a project in development based on the novel Tell Me Lies by Carola Lovering. 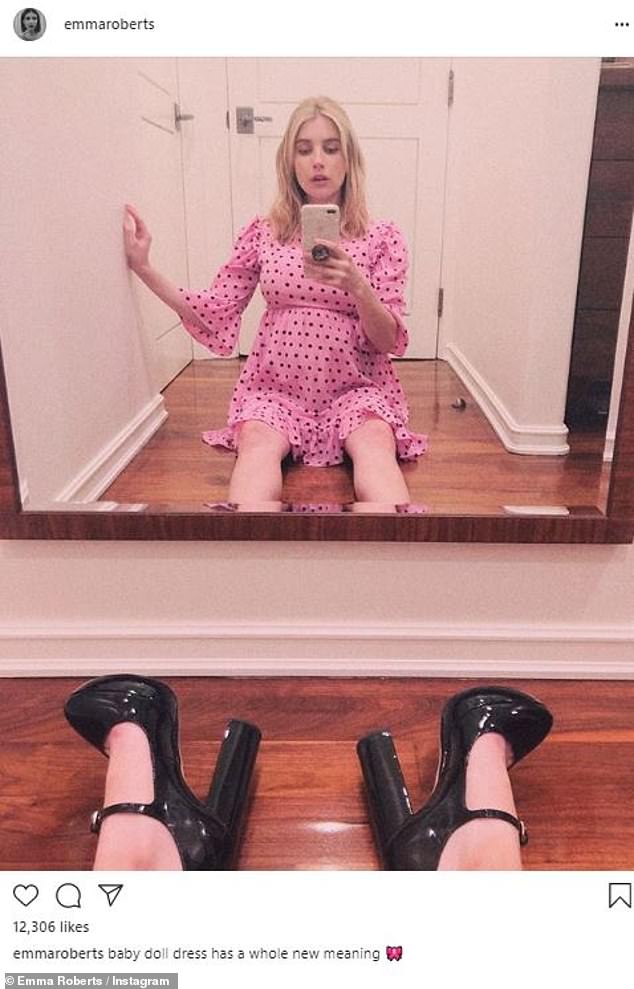 How Heidi Klum Became the Queen of Halloween

Scarlett Johansson and Colin Jost are married! The actress and funnyman 'wed during secret ceremony'

High cholesterol warning signs on your skin explained – do you have these yellow bumps?

What comes next for Labour after the suspension of Jeremy Corbyn?

From bantu knots to braids, we've rounded up the best protective hairstyles for textured hair

Coronavirus live news: Russian vaccine may be available to Moscow residents next month