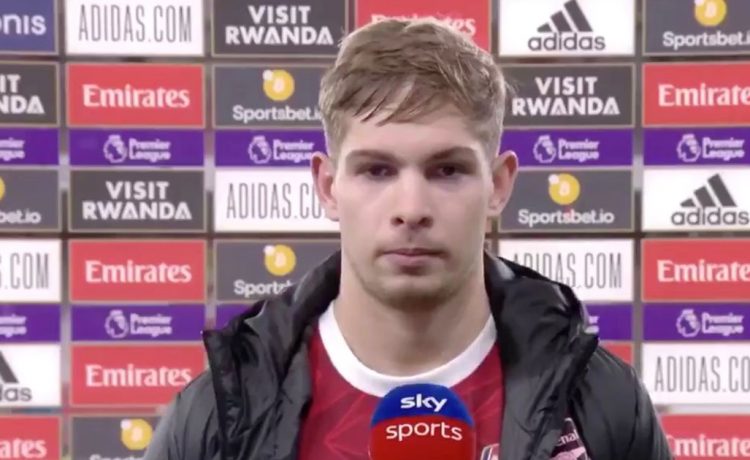 Emile Smith Rowe took a long pause after Gary Neville asked him which Arsenal teammate had influenced his rapid progression most.

As thoughtful as he is on the pitch, the 20-year-old’s post-match interview belied someone that has made just seven Premier League appearances.

His emergence from Europa League rotation to first-team regular has been as meteoric as it has impressive.

With Mikel Arteta’s job security at its lowest, the Spaniard turned to the midfielder before the Boxing Day clash with Chelsea.

Five games and four wins later, the mood in north London has been completely transformed and Smith Rowe is at the centre of it all.

He picked up his third assist in the league against Newcastle, capping a standout display in the 3-0 win at the Emirates.

In just a matter of weeks, Smith Rowe is becoming the centrepiece of Arteta’s revolution and now should be treated as such.

With that in mind, his answer to Neville’s post-match question should be one carefully observed by his manager.

“I can’t cancel out nobody,” he said, before adding. “But Lacazette…playing together with him up top, I feel like he’s helped me so much, both on, and off the pitch.

“He gives me so much confidence and as we link up, he talks to me a lot. So I’d say him the most.”

But it’s not just his goalscoring form that has caught the eye of supporters and neutrals alike.

Prior to that win over Chelsea, the Frenchman looked bereft of confidence and like he had lost that burst that made him so clinical in the early stages of his career.

Should Arsenal offer Lacazette a new contract? Have your say here.

The former Lyon striker has just 18 months left on his deal at Arsenal, with reports suggesting it is unlikely they will extend that beyond his current terms.

Recently, Real Madrid and Atletico Madrid have been linked with a swoop for Lacazette, who signed for the Gunners back in 2017.

It has been claimed there are reservations over whether he is the long-term answer for Arsenal in the centre forward position.

With seven Premier League goals so far this season – and nine in all competitions, he is hardly a passenger in the current squad.

But if Smith Rowe’s development hinges on Lacazette remaining in north London, the choice becomes very simple for Arteta.