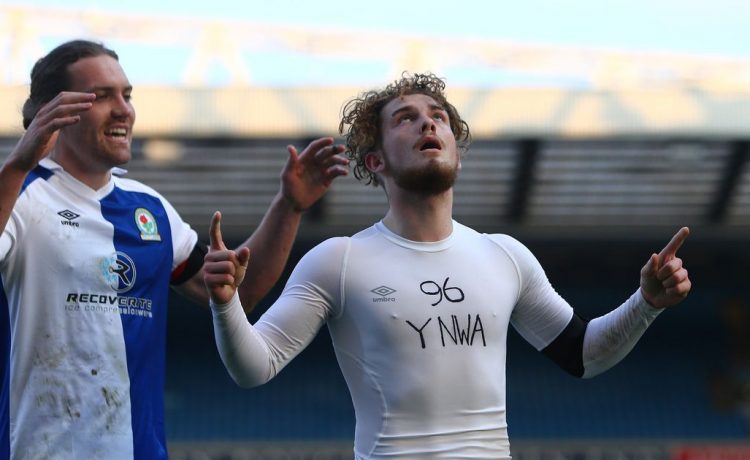 Liverpool loanee Harvey Elliott paid tribute to the victims of the Hillsborough disaster after scoring in Blackburn Rovers’ 2-1 win over Derby County on Friday.

The 32nd anniversary of the disaster was marked on Thursday, with Liverpool paying tribute by laying wreaths at the Anfield memorial and observing a minute’s silence.

Elliot, who has spent the season on loan at Ewood Park from Liverpool, removed his shirt after scoring Blackburn’s second goal to reveal the message “96 YNWA” written on his undershirt.

The goal proved to be the winner and Blackburn boss Tony Mowbray said after the game: “You have to say that the result is important.

“I don’t want to be hypocritical and say that it’s all about the result when I sat here after Bournemouth and said that the performance was good yet we got beat 2-0.

“If anything I was a bit disappointed with the performance level of the team, particularly first half. Second half we upped it and could have scored a few more goals.

“I can’t remember playing without the control we normally have for a long time yet we won the game. We could have scored more, Adam [Armstrong] could have had a hat-trick, yet I thought they were a pretty decent team, a good structure to their play, but we take the points and move in the final four.”

He added: “I think after we scored it gave the team a bit of confidence, because they came with a game-plan, they didn’t play with their big centre forward and played a transition game, a front four that looked like they could all break away.

“I’m happy to take the points, move on. They’re a good side, they have to win a game or two themselves before the end of the season but there’s good signs.

“For us, it was important to get to 50 points, four games left, and let’s see how many we can get to.”