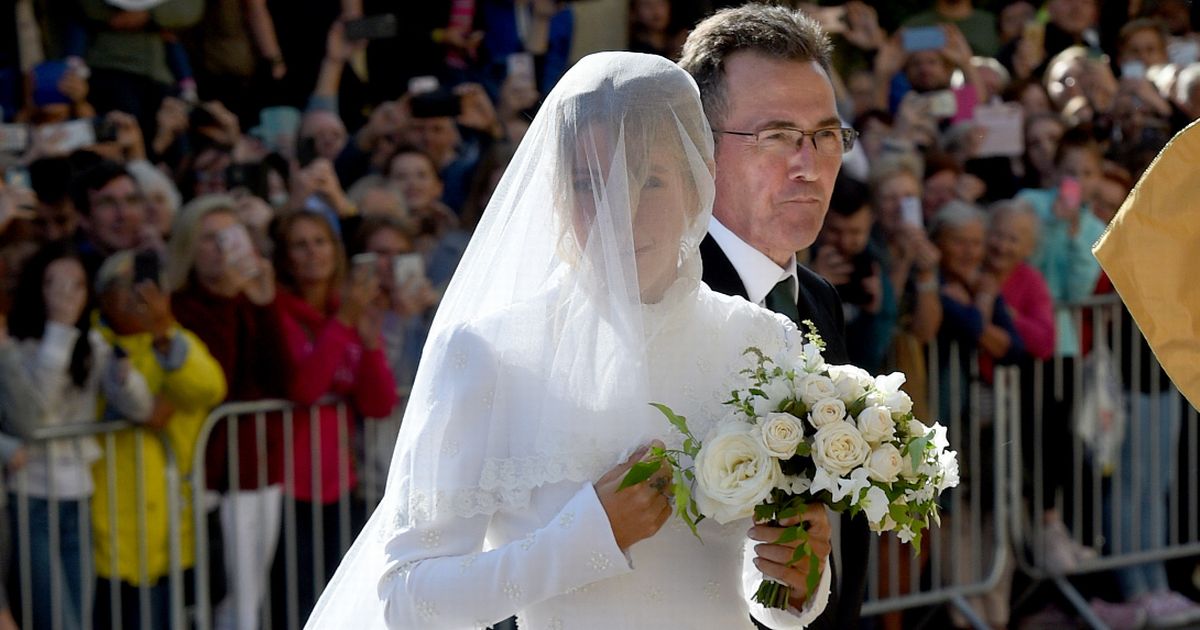 Ellie Goulding’s wedding dress has been revealed in full for the first time – and it is quite the sight to behold.

The bride wore a flowing column dress with a Victorian-style high neckline and full sleeves that reached down to her wrists.

The 32-year-old Love Me Like You Do singer looked incredible in the pure white gown, which featured a tight-fitting bodice that nipped in at her waist then flowed elegantly out and down to the ground.

Ruffles adorned her circular neckline, while the dress itself was covered in lace embellishments formed to look like flowers.

Her long train swept the ground behind her as she made her way into York Minster surrounded by bridesmaids wearing similar modest column dresses in white.

She accessorised with a long sheer veil, which covered up her face as is tradition at aristocratic weddings.

Ellie’s long blonde hair was swept up in a simple chignon and her makeup under the veil showed plenty of blush on her cheeks and smoky eyes.

She kept her lips relatively low-key and teamed the gown with a pair of drop pearl earrings, as well as tiny studs further up her earlobes.

Ellie clutched a simple bridal bouquet made up of cream roses and green foliage, which she held in front of her gown as she prepared to walk down the aisle towards her husband-to-be, Caspar Jopling.

She arrived late – as is tradition – by nearly thirty minutes as her A-list guests waited in the historic cathedral, where outside screaming crowds had to be kept behind metal barriers by police.

Ellie arrived at the ceremony in a blue Volkswagon campervan and was met by her array of bridesmaids, who all applauded as the bride pulled up.

She smiled and waved at the crowd as she was met at the entrance by the bishop conducting the ceremony, who wore a multicoloured yellow, blue and red cape and mitre.

Among the famous faces who arrived to watch Ellie and Caspar tie the knot were Hollywood A-listers Orlando Bloom and his fiance Katy Perry, who looked beautiful in a watercolour print floaty dress and an oversized pale blue coat with a tiny pink handbag.

Singer James Blunt and his wife Sofia Wellesley were also there, as where Sarah Ferguson, the Duchess and York, and her royal daughters Princess Beatrice and Princess Eugenie.

There was speculation that Prince William and Kate Middleton, the Duke and Duchess of Cambridge, would be in attendance after Ellie performed at their royal wedding in 2011, but they were nowhere to be seen.

Also missing from the congregation were Ellie’s old flame Prince Harry and his wife Meghan Markle , who stayed away after recent controversy over their use of private jets.

Ellie and Caspar will be taking their guests the 15 miles down the road to Castle Howard for their speculator wedding reception, which is believed to be festival-themed.

The historic castle has been at the heart of intense preparations all week as staff work tirelessly to fit portable loos, two enormous marquees and a stage to the beautiful grounds ahead of the wedding of the year.