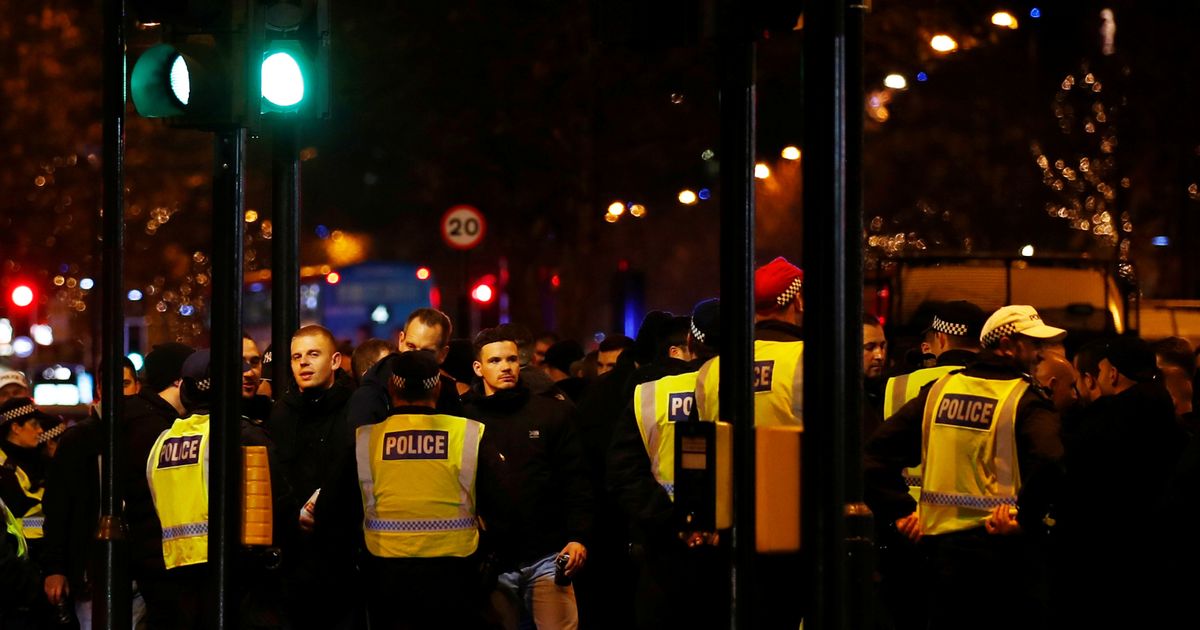 Eintracht Frankfurt fans have been escorted by police outside the Emirates Stadium ahead of their clash with Arsenal amid a UEFA ban.

The Bundesliga club are currently under a travel ban after crowd trouble at their game against Vitoria Guimaraes in October.

With around 5,000 fans originally expected to make the journey to London, the Gunners launched a major security operation to prevent them getting into the ground.

Hundreds of fans were escorted down Holloway Road as they arrived at the stadium ready to greet the team coach.

They were surrounded by smashed bottles and a heavy police presence as they were moved back away from the perimeter of the stadium.

Police planned to move them back after the arrival of the team coach, with visiting fans not permitted to watch the game in Islington amid fears of violence.

They were closely monitored by police throughout the day to keep control of the situation.

It appeared hundreds still attempted to gain access to the game, with footage on social media showing police blocking Holloway Road then moving a further group of around 200 fans back from the stadium as they gathered on Hornsey Road.

Arsenal worked closely with the police to avoid a scenario similar to their game against Cologne two years ago.

On that occasion, visiting fans stormed through turnstiles to get into the game, causing kick-off to be delayed by more than an hour.

The club issued a statement this week having not put any tickets on general sale and suspended their membership scheme to stop German supporters from registering.

An Arsenal statement read: “We are appealing to all Arsenal fans to arrive early to avoid the lengthy queues which will be caused by the extra security.

“We remind all our supporters not to allow your tickets to end up in the hands of Eintracht Frankfurt fans.

“The club will take the appropriate action against any member found passing, selling or offering their tickets for sale which will lead to a cancellation of their membership resulting in a ban.

“Any Eintracht supporters in possession of a home ticket will be refused entry and any who do manage to gain entry will face ejection from the stadium.”