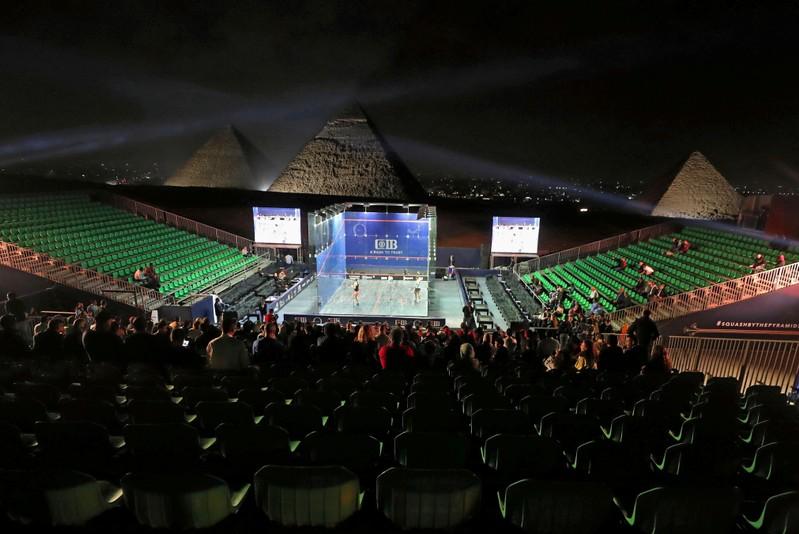 CAIRO (Reuters) – The female world squash champion will receive more prize money than the male equivalent for the first time at the CIB PSA Women’s World Championship in Egypt this month as the sport takes gender equality to a new level.

FILE PHOTO: People watch a squash match in front of the pyramids of Giza, during the Professional Squash Association (PSA) Women’s World Championship in Giza, on the outskirts of Cairo, October 26, 2019. REUTERS/Mohamed Abd El Ghany

“With the prize money of the women’s being so high, even higher than the men’s world champs this year, it is great for our sport to actually have the women appreciated,” said Raneem El Welily, the female world number one.

“As a player, I feel very lucky to be part of such a strong era in squash history.”

El Welily is one of four Egyptian women vying for the record fund, as she takes on Nouran Gohar in the semi-finals while Hania El Hammamy faces Nour El Sherbini for a place in Friday’s final.

The increase in prize money was enabled by sponsor CIB pledging an additional $100,000 into the pot.

Aside from the unique location, Egypt is a fertile market for squash as the top four men in the game are from the North African nation, including world champion and number one Ali Farag, as well as four out of the five top women.

“The pyramids championship that began in the late 90s, of course, we all hoped to play on such a big stage one day,” said Farag.

The top junior players are also Egyptian for both genders, helped by the fact the country has the world’s biggest squash academy. Egypt is also world champion in the teams categories for men and women, as is the case with juniors for both genders.

“In squash, there are constantly champions who children always look to and want be like, so people believe that they can reach that status.”