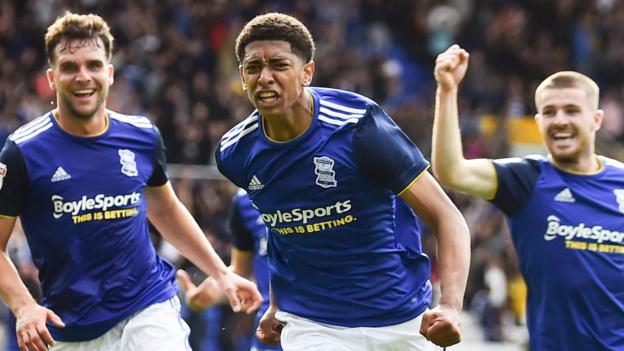 With the English Football League season already six rounds old, it’s usually about now that those eye-catching unbeaten starts begin to grind to a halt.

As it happens, nine teams will head into September having yet to taste defeat – but Saturday did claim a couple of high-profile victims.

Leeds United, top of the Championship at the start of the day, were stung by a 90th-minute Wayne Routledge winner as Swansea City leapfrogged the Whites to reach the summit and keep their own unblemished record intact.

In League One, Sunderland’s first loss was not quite such a close-run thing, with the Black Cats thrashed 3-0 at Peterborough United and ending the game with nine men.

The drama and chaos of those two matches were indicative of another busy day in the EFL – and here are a few more things you wouldn’t want to miss.

Barcelona winger Ansu Fati may have hit the headlines on Saturday for becoming the club’s youngest-ever La Liga goalscorer – but he wasn’t the only 16-year-old doing his thing this weekend.

Jude Bellingham, who only turned 16 in June, came off the bench to score the winner in Birmingham City’s 2-1 victory over struggling Stoke City.

Having been with Blues since the age of seven, Bellingham became the youngest first-team player in their history when he made his debut in the Carabao Cup earlier this month.

He said after the match against the Potters that scoring was “something I’ve dreamt of since I was a boy” – which, in fairness, could’ve been as recently as last night.

“I’ve done it and it feels amazing but I’m very hungry for more,” he told BBC WM 95.6. “I’ve loved the club since I joined when I was seven. I can’t wait to give them more of what I’ve got.”

Given other events this week Bolton Wanderers fans will probably just be happy that they still have a team to support.

Neighbours Bury were expelled from the EFL on Tuesday, ending their 125-year stay in the Football League, after a takeover of the club collapsed.

Despite the takeover and boosting their senior ranks to six with the addition of defender Jack Hobbs on Friday, Bolton slipped to a third successive 5-0 defeat on Saturday.

The result meant that Bolton, who have not scored a goal since April, become the first team since Torquay in 1930 to lose three successive league games by five goals or more.

Keith Hill, appointed Wanderers boss after the game on Saturday, will know he faces a huge task to keep the club, who are currently on -11 points, in the third tier.

It’s not always an easy lot, the life of a striker.

Both players endured tough campaigns in 2018-19 but, still in August, both strikers have already matched their goals tally from last season to help their sides make flying starts this time out.

Jackson’s fourth in seven games this season helped Paul Lambert’s side register a comfortable 3-0 home win over Shrewsbury Town to stay top of the table.

Meanwhile, Hanson scored twice for the Mariners in their 3-1 win at Walsall to take him up to five goals in 2019-20.

Another League Two striker enjoying a fine start to the season is Swindon Town’s Eoin Doyle.

The Irishman failed to score in three outings for Bradford City before joining the Robins earlier this month, but since arriving in Wiltshire he’s bagged five goals in four outings, with two more on Saturday in a 3-1 win over Morecambe.

No, not that way!

Five players put through their own goal in the EFL on Saturday, with Coventry City defender Fankaty Dabo scoring at the wrong end twice in his side’s dramatic 3-3 draw at Oxford United.

First, the former Chelsea defender levelled for the hosts in the 85th before seeing the ball bounce off him for an incredibly unfortunate second own goal of the game in the last moments of stoppage time, shortly after Mark Robins side had gone 3-2 up.

“There wasn’t anyone on him for the first one but they had been putting a lot of pressure on. He deals with balls like that with his eyes closed, maybe that was the problem, he closed his eyes and lifted it into his own net,” Robins told BBC Coventry & Warwickshire.

“He’s got to come back from it and be strong. He’s a player who is making his way in the game and he will learn from it.

“It’s not a memory he will want to keep but it’ll be there and hopefully he’ll get his body in a position where he can deal with a cross in future.”

It’s been a grim time in League One for Southend United so far this season, and the Shrimpers fell to their sixth consecutive defeat as they were beaten 3-0 at home by Rochdale.

The Essex side are the only one of the 91 teams in the Premier League and EFL yet to pick up a point in the new campaign, and the only thing keeping them off the bottom of the table is the fact Bolton Wanderers are on -11 points.

Manager Kevin Bond, who has won three of his 14 games in all competitions since taking charge in April, says he is “not thinking” of his position despite their desperate form.

“I am thinking of Southend, the defeat and what we might be able to do about it,” the 62-year-old told BBC Essex.

“I understand the fans want change, but that isn’t my decision. I am not absolving myself from the responsibility but it is a bit of a legacy of the recent past.”

“Are we good enough?” Bond asked. “We ended up staying up by the skin of our teeth last season when we were looking dead and buried. Maybe we were fortunate and aren’t as good as we think we are.”