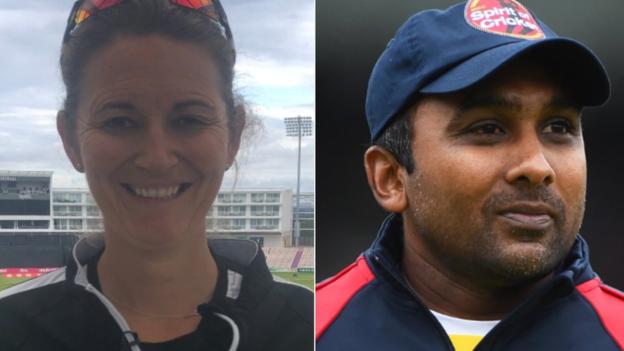 Charlotte Edwards and Mahela Jayawardene will be head coaches of the women’s and men’s Southampton-based teams for The Hundred.

He has twice led Mumbai Indians to victory in the Indian Premier League.

Edwards’ appointment makes her just the second English coach to be handed a position in the new eight-team men’s and women’s 100-ball tournament, set to start in July 2020.

Her former England team-mate Danielle Hazell was confirmed as women’s coach for the Leeds-based side earlier this month.

Edwards has also been assistant coach at Adelaide Strikers in the Women’s Big Bash League in Australia since she retired from international cricket in 2016.

“It’s something I’ve wanted to be involved in since hearing about the competition,” she told BBC South Today.

“I feel incredibly lucky to be asked to be head coach for the Southampton side and with the hype around the game at the moment, there’s no better time to be involved.

“The main thing about The Hundred will be attracting new audiences and I think families will be a hugely important part of that.

“Hopefully we can attract big crowds here at the Ageas Bowl and put bums on seats.”

Jayawardene, who scored 34 Test centuries and captained his country to the 2011 World Cup final, was briefly a consultant coach with England in 2015-16.

Edwards captained England for a decade during a 20-year international career which included winning the World Cup and World T20 in 2009 and back-to-back Ashes triumphs in 2013.

Mark Robinson stood down as England women’s head coach on 20 August and, although there is a vacancy, Edwards wants to explore other opportunities first.

“This role (in The Hundred) has come at the right time for me,” she said. “It’s the next step, being a head coach.

“I think the England job’s a long way off for me but I would like to be involved in the player pathway at some point.

“My attention’s fully here and I’m looking forward to making this side a success.”

Confirmed coaching appointments for The Hundred