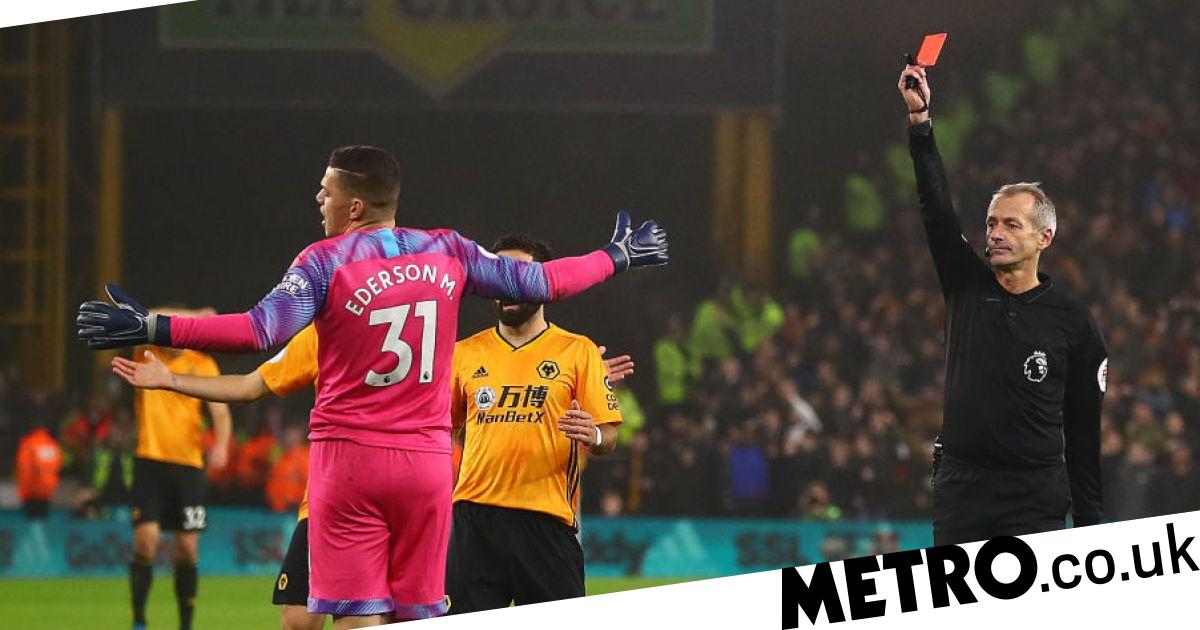 An action-packed first half at Molineux saw a red card for Manchester City goalkeeper Ederson and Raheem Sterling twice miss a penalty before putting his side ahead against Wolves.

This was all before Wolves bounced back from a two-goal deficit to go on to win the match 3-2 in a wildly entertaining contest in the Premier League.

Just 12 minutes into the contest Diogo Jota sped beyond the City defence and Ederson came tearing out of his penalty area towards him.

The Wolves forward knocked it past the keeper and was brought down by the Brazilian, leading to a straight red card early on in the match.

Forced into a change to bring on substitute goalkeeper Claudio Bravo, Man City boss Pep Guardiola dragged off Sergio Aguero for the Chilean to replace.

Ederson is SENT OFF ?

Drama at Molineux as Man City are reduced to ? men!

There was little or no controversy about that decision for referee Martin Atkinson, but there was plenty over decisions later in the half.

22 minutes in, Riyad Mahrez went down in the penalty box under a challenge from Leander Dendoncker which was initially not given, but was overturned by VAR, offering Man City a golden chance to take the lead.

Sterling stepped up to take the spot-kick which was saved by Rui Patricio, but ruled to be retaken by VAR due to encroachment.

Sterling had another go from 12 yards and Patricio saved again, with the England international putting his shot in the exact same place as his first attempt.

However, the Wolves stopper could only push the ball back towards Sterling and he tapped into an empty net to put his side ahead.

Replays showed that Dendonker had indeed stepped on Mahrez’s foot and there had been encroachment on the first penalty.

Here is the penalty decision awarded by VAR ?

Nasty scenes ensued as objects were thrown at the celebrating City players from the stands at Molineux, with Wolves fans furious with the VAR decisions.

It was unclear what the item was but it was enough for an announcement in the ground to both sets of supporters asking them to refrain.

Sterling gave the Premier League champions a 2-0 lead when he got his second in the 50th minute and it looked that they were going to claim an unlikely three points after losing a player so early.

However, an even more unlikely three points was handed out as goals from Adama Traore, Raul Jimenez and Matt Doherty gave Wolves a 3-2 victory, with Doherty slotting home the winner in the 89th minute.

MORE: Trent Alexander-Arnold names Steven Gerrard and Xabi Alonso as the Liverpool legends he models his game on

READ  Tottenham reveal Harry Kane is set for surgery on hamstring injury
Share on FacebookShare on TwitterShare on PinterestShare on Reddit
newsgrooveDecember 27, 2019